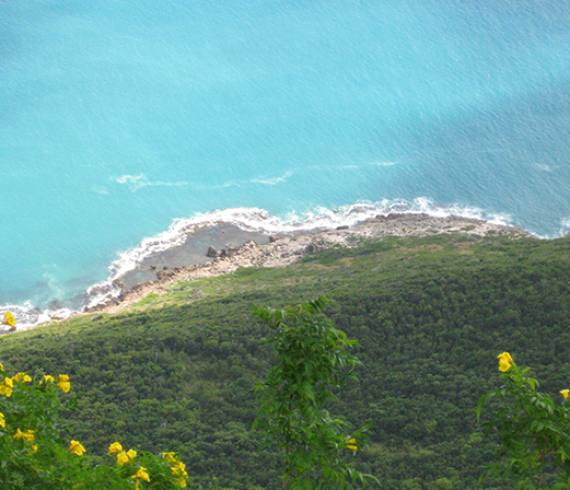 by admin· February 14, 2016· in Jamaica, Lifestyle, Vacation· 0 comments
The beauty spot known as Lovers’ Leap emerges where the Santa Cruz mountains come to an abrupt end at Jamaica’s south coast, exposing a 1,700ft vertical drop down to the waves crashing on Cutlass Bay below. The lookout provides a fantastic vantage point to look for miles out to the Caribbean Sea. Along the coast the view stretches as far as Rocky Point (Clarendon) to the East and to Treasure Beach in the West. You will be reminded of how high you are standing when you notice birds, clouds and light aircraft flying below you!   The legend of Lovers’ Leap Lovers’ leap is named after two slave lovers from the 18th century, Mizzy and Tunkey. Legend has it that their master “Chardley” took a liking to the girl and, in a bid to have her for himself, he arranged for her lover to be sold to another estate. The pair fled to avoid being separated but were eventually chased to the edge of a large steep cliff. Rather than face being caught and separated, the pair chose to end their lives by jumping together. However, the exact details of the story vary depending on who is telling […] Read More