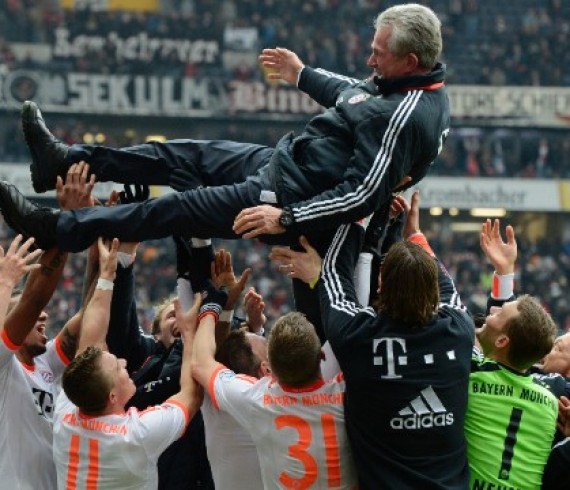 by admin· April 07, 2013· in Brazil, FIFA, Football, News, Reggae Boyz, Rio 2016, Track and Field· 236 comments tags: Athletics, Ato Boldon, Bayern Munich, Brussels, Brussels: Bolt comes back to Memorial, Bundesliga, Carifta, Carifta 2013, Carifta U-17, Carifta U-20, Diamond League, Diamond League Brussels, Jamaica, Jamaica sports, Samsung Diamond League, Shelly-Ann Fraser-Pryce, U-17, U20, Usain Bolt, Veronica Campbell-Brown
Double Olympic sprint champion Usain Bolt has passed on his congratulations to Bayern Munich on winning the Bundesliga title in record time. Bolt, who defended his 100m and 200m Olympic titles at London 2012, is occasionally in Munich to see renown sports doctor Hans-Wilhelm Mueller-Wohlfahrt, who also works with the Bayern team and the Germany side. The 26-year-old specifically thanked Dr Mueller-Wohlfahrt after his 100m victory in London having been treated by the German doctor in the build-up to the Olympics and says the pair speak by telephone “from time-to-time”. He is also friends with some of Bayern’s players. Bayern won the Bundesliga title for the 22nd time in the competition’s 50 year history on Saturday with a 1-0 win at Eintracht Frankfurt, thanks to Bastian Schweinsteiger’s second-half goal, and Bolt offered his congratulations. “It’s impressive what Bayern have done this season,” Bolt told German daily Bild on Sunday after Bayern won the title with six games left, a new Bundesliga record, and hold a 20-point lead. “To be champions with such a lead and so early in such a strong league, is extraordinary. “First of all, I want to congratulate Basti (Schweinsteiger) and the team, who, just like […] Read More