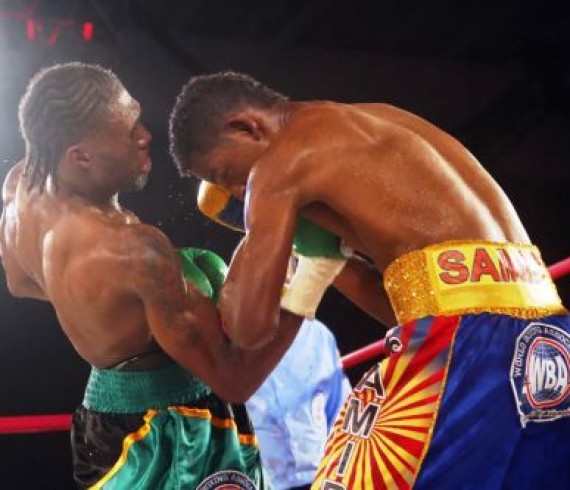 by admin· December 09, 2012· in Boxing, News, Sourced· 10347 comments tags: Axeman, Boxing, Daulis Prescott, Nicholas Walters, WBA
The Jamaican Nicholas Walters became the new featherweight champion of the World Boxing Association, after knocking out the Colombian Daulis Prescott in the seventh round in fight held in Kingston at the KO drugs. Walters and Prescott engaged in a very closed fight since the first round, however, the local began to punish down to make him feel his punches. Prescott got the first count in the fourth round, and then in the sixth, both from punishment in the middle zone. In the following round, the Colombian did not resist more punishment and at 35 seconds of the seventh round Rafael Ramos stopped the fight Malpartida sweat and retained her Crown The Peruvian champion Kina Malpartida retained her belt before the difficult Dominican Marilyn Hernández. Malpartida got the count in round three and looked lost in the ring, surprised by Hernandez’ attacks, and had a hard time getting rid of her. However, the Peruvian won her sixth defense by unanimous decision. Sánchez Interim Champion Alys “La China” Sanchez grabbed the WBA super bantamweight interim title, when defeated the Mexican Maria “Explosive” Villalobos by unanimous decision in ten rounds, in the first fight of the KO Drugs in Kingston. The three […] Read More