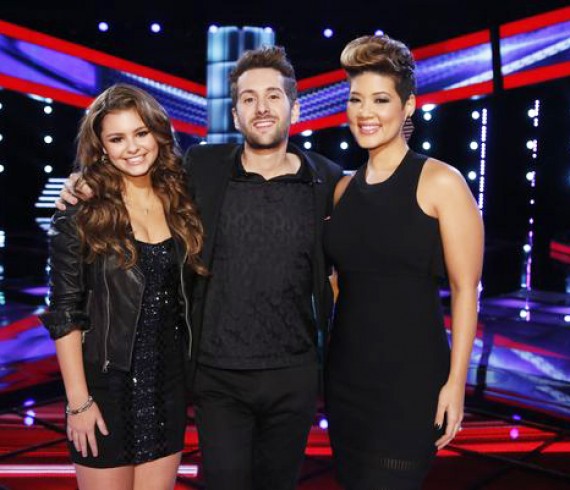 by admin· December 09, 2013· in Jamaica, JO Articles, News· 0 comments tags: Bread and Butta, Team Tessanne, Tessanne Chin, The Voice
Team Adam and Team Christina are competing for championship, as are finalists Tessanne Chin, Will Champlin and Jacquie Lee. The Voice is getting ready to crown a new winner — among its contestants and its coaches. NBC’s singing competition is down to a trio of finalists who are vying to be the Season 5 champion during finale week (Monday, 8 ET/PT, and Tuesday, 9 ET/PT). But the winningest coach at The Voice won’t have a singer in the running. Country music artist Blake Shelton, who has had three consecutive wins in four seasons, has no horse in this headlining race. His last chance, country-rock-soul singer Cole Vosbury from Louisiana, was eliminated last week, along with coach Adam Levine’s rock balladeer James Wolpert. “Blake’s won this thing three times, so he can sit this one out,” says host Carson Daly. “Give somebody else a chance here.” Who’s left to sing their hearts out? Levine’s Tessanne Chin and Will Champlin, and Christina Aguilera’s young protégé, Jacquie Lee. “These three — all of them — their last two performances have all been so strong,” Daly says. “The winner might be the one who doesn’t mess up, so at this point, don’t screw up.” […] Read More