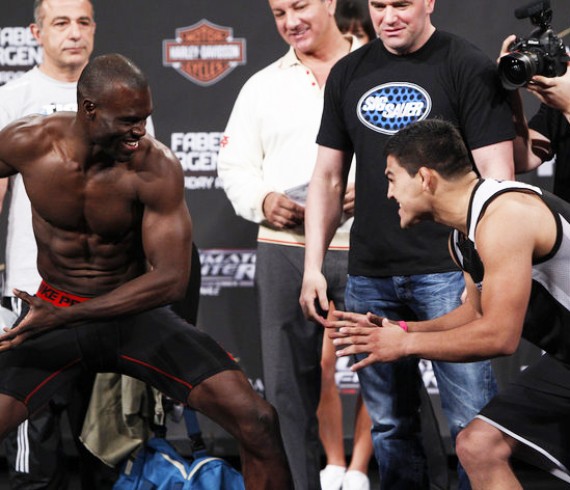 by admin· April 14, 2013· in Boxing, Jamaica, News· 5926 comments tags: Alicia 'Slick' Ashley, Athletics, Ato Boldon, Boxing, Brussels, Brussels: Bolt comes back to Memorial, Carifta, Carifta 2013, Carifta U-17, Carifta U-20, Chantall Martinez, Diamond League, Diamond League Brussels, Jamaica, Jamaica sports, MMA, Panama City, Samsung Diamond League, Shelly-Ann Fraser-Pryce, super bantamweight title, The Ultimate Fighter, Title fight, TUF 17, U-17, U20, UFC, Uriah Hall, Usain Bolt, WBC
Uriah Hall is a Jamaican Mixed Martial Artist (MMA) artist currently fighting as a middleweight. He is the current Ring of Combat Middleweight Champion. He has fought notable fighters like Chris Weidman and Costa Philippou. Uriah Hall was born in Spanish Town, Jamaica but moved to Queens, New York in the United States at the age of thirteen. Upon his arrival in a new country, he was bullied at school but found refuge in martial arts. He is a second degree blackbelt in Tiger Schulmann’s Mixed Martial Arts under Tiger Schulmann and also competed as a kickboxer in the World Combat League. A contestant on The Ultimate Fighter: Team Jones vs. Team Sonnen. From early days of their time in The Ultimate Fighter house, their roles were cast. Uriah Hall was the flashy, powerful favorite, capable of intimidating the opposition, while Kelvin Gastelum was the inexperienced underdog, the last pick on his team. Hall was one of the heaviest favourites in TUF Finale history, having delivered a series of brutal knockouts during his run to the final. It was an unlikely pairing to end the season, but they both survived the tournament structure to meet in the TUF […] Read More