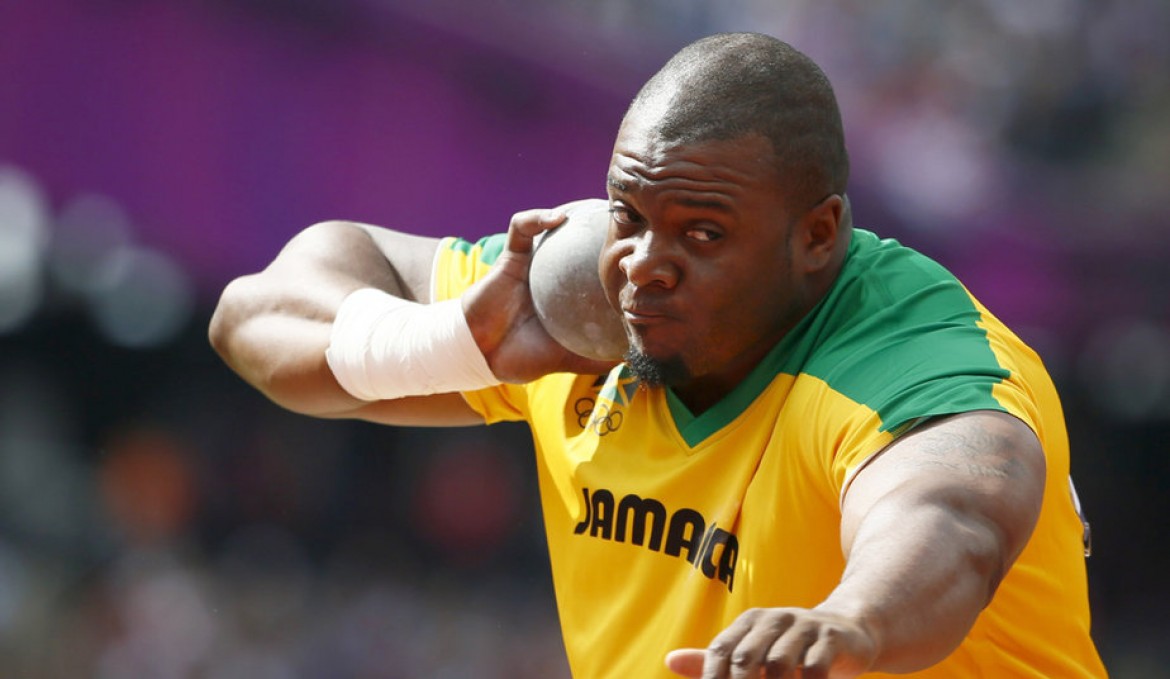 Harlis Meadersleft a sizeable void on the Florida State track & field staff when, after 18 seasons as the Seminoles’ throws coach – the last eight as associate head coach – he returned to his alma mater, the University of North Carolina, as the head coach.

Florida State head coach Bob Braman’s search for a replacement led him directly to a man of sizeable stature and a passion to help his alma mater return to the top of the podium at the NCAA Championship meet.

Dorian Scott, a 2007 Florida State graduate who was mentored by Meaders, has taken the reins as the Seminoles’ throws coach. A two-time Olympian representing Jamaica in the shot put, and a former All-American for the Seminoles, Scott jumped at the chance to return to Tallahassee after one season as the throws coach at San Diego State.

His appointment came just a month after becoming the first Jamaican thrower to reach the Olympic finals in the shot put, finishing 10th at the London Games.

“It’s extremely exciting, just at the level we’re at – going after national [championships] on both men’s and women’s side,” Scott said. “Not knocking San Diego State, but I was coming from, `We’re happy to be top 10,’ to `Let’s go. Let’s get No. 1.’ I’m really excited.”

Scott returns to his second home – he was raised in New Jersey – after a remarkable first year at San Diego State, where he produced the program’s first NCAA champion since 1985 in the women’s discus.

“I’ve got a house here, so it’s coming home,” Scott said. “I came here in 2000, and its 2012, so I’ve only been away for one year. I’ve been here almost a third of my life. This is home. New Jersey will always be, `home, home,’ but this is as comfortable as I could possibly be outside of my home in New Jersey.”

With Scott’s arrival, Braman has restructured his veteran staff. Ken Harnden has been promoted to associate head coach, while retaining his duties as FSU’s director of sprints, hurdles & relays. Dennis Nobles, the senior member of the Seminoles’ staff, has been appointed director of field events, but will continue to coach the jumps and multi-event athletes.

Jennifer Santiago, who has had a long-standing relationship with the program through her time in both academics and compliance, has accepted the post as the first full-fledged director of operations.

In addition to his oversight of the entire program, Braman will continue to coach the men’s distance group, while Karen Harvey will direct the women’s distance outfit. Harnden, Nobles, Braman, Harvey and Scott have all coached at least one NCAA individual champion.

“This is really a neat deal for us,” Braman said. “Here’s a guy [Scott] who’s an Olympian, makes the final and is top 10 in the world. Oh, and by the way, in his first year of coaching he has an NCAA champion. I wish I could have said that. It took me a lot of years to get an NCAA champion.

“Dorian comes back home; somebody that has been loyal to this program as a post-collegian and became who he is under Harlis Meaders’ tutelage and through this program. This is a really great thing. He’s going to be a really good coach beyond a throws coach. We know he can coach the shot and discus. … He’s a really bright guy. His father is a doctor and he comes from a really bright, educational family.”

While pursuing a professional career as a thrower, Scott also served as a volunteer coach with Meaders and the Seminoles after he graduated.

“Coach Meaders is almost solely responsible for me coaching,” Scott said. “My dad would always ask me, `What are you going to do?’ I really had no answer for him. Coach Meaders would say, `Make sure you’re here for these heptathletes or decathletes,’ and kind of kept me in a coaching role when I didn’t really realize it.”

It wasn’t until Meaders became a target for several coaching vacancies, and suggested Scott join him when the right offer came along, that he began to seriously consider a coaching career.

“It was a natural fit,” Scott said. “I’m outdoors. I’m with the kids. I can’t imagine being in a cubicle all day or anything like that. It was a perfect, natural fit. I would say coach Meaders was solely responsible for me being in this position right now.”

It’s hard for Scott to fathom exactly how much his life changed when he left Seton Hall Prep in West Orange, New Jersey, to come to Florida State in the fall of 2000. Up until his senior year of high school, he had visions of playing college football.

“I did shot put for fun,” said Scott, who spent the summer before his senior year of high school eyeing a football scholarship. “Then my first day of school the head [track] coach … said, `Come to the office.’ He had boxes of letters from schools from all over just for me to throw shot.”

Scott’s ascent from a 64-foot high school thrower to the No. 2 shot putter in FSU history (66-4) and a first-team All-American in 2005 was dramatic. He still holds the Mike Long Track record (70-4.50), which he set as a professional in 2009, one year after representing Jamaica in the 2008 Beijing Olympics.

Along the way Scott has compiled an impressive competitive resume. In addition to his Olympic feats, he is a two-time World Championship finalist, finished sixth at the 2008 World Indoor Championships and won a silver medal in the Pan American Games. He captured his eighth Jamaican national championship this past June and holds that country’s national and junior national records. Scott also won gold in the shot put at the Central American and Caribbean Games.

His first foray into coaching this past year at San Diego State, was no less impressive. The Aztecs’ top 10 lists in all throwing events are dotted with Scott’s first-year pupils, led by Whitney Ashley, who captured the NCAA Outdoor Championship in the discus.

Scott borrowed a lot from Meaders in his first season, and added his own touches along the way. He applied the same tireless approach to conditioning and preparation that catapulted his own career.

“The bigger the base, the higher the peak,” Scott said, when asked about his training regimen. “I’m trying to make that base period as long as possible, and then when it’s time to get started [throwing], we’ll go right at it.”

“It was a good year,” Scott said of his first year as a full-time coach. “It kind of reassured me that I’m in the right spot.”

Braman has always been impressed with Scott’s personal skills, as well as his work ethic.

“He’s a cool guy because he’s a pro and the kids really respond to him,” Braman said. “We saw that when he was just here training. You see that in the athletes he worked with at San Diego State. I have no doubt in my mind that he’s going to be a good, young, enthusiastic guy who can help Ken and Devin in recruiting.

“He brings some stuff. He’s going to be able to bring those athletes and is going to be a key cog in that Caribbean wheel; not just Jamaica, but the whole thing. As we learned from the Olympics, that’s a national sport in Jamaica.”

Scott’s “cool factor” was elevated during the London Games, when Jamaican Olympic sprint start Usain Bolt employed him as his bodyguard.

“Being on the national team and being Bolt’s bodyguard and stuff, he’s a guy that those club coaches and high school coaches know and trust,” Braman added. “And he’s not going to do anything to disrupt his position with his national team. Whether he continues to compete or not, does not matter to me. I think he’s still got a few years in him if he wants to make a run for Rio. He has all of those elements.”

Braman has also promised Scott the chance to bring in quality throwers as the Seminoles continue to pursue NCAA team titles on the men’s and women’s side. He has already delivered on Braman’s promise, landing Jamaican discus and javelin standout Kellion Knibb, who just arrived on the FSU campus.

“He’s going to have an opportunity on both sides to put in some really big pieces,” Braman said. “Maybe that’s the difference in getting those one or two or four points when we need them indoors and outdoors. Certainly it’s helped Texas A&M. It’s helped Florida. Maybe it’s time when we get back to the Garrett Johnson-Dorian Scott days when those guys were putting points on the board.”

Scott missed out on being part of Florida State’s first men’s NCAA Championship team in 2006 by one year. Now he has a chance to join forces with some of the same coaches – Harnden and Nobles, along with West, Braman and Karen Harvey – to bring more hardware back to his old home.

It’s an impressive coaching lineup when you consider Harnden, Nobles, Braman and Harvey – and now Scott – have all coached NCAA individual champions.