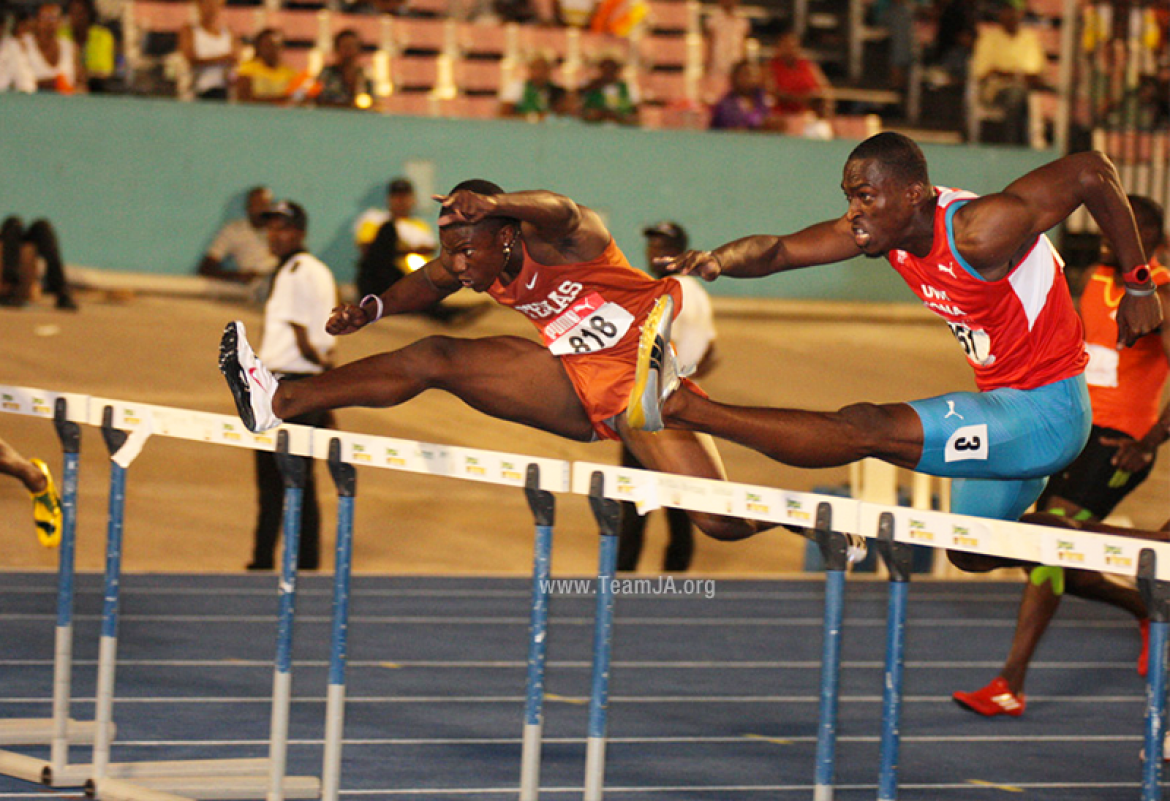 Parchment is the fastest of the fancied trio and was the number one rated sprint hurdler in the world in 2014 with his national record run of 12.95 in July the fastest time recorded for the year. Parchment looked set to dominate before various injuries curtailed his season and he has looked far from sharp in 2015 suffering several defeats. The tall and powerfully built former Kingston College/Morant Bay High star registered his season best time of 13.40 (-0.6 m/s) in Des Moines in April when finishing 5th in a very strong field. Parchment who celebrated his 25th birthday on June 17 is a proven commodity but has been sparingly raced this season and may be feeling the ill effects of the injuries of the last two years. He is the 3rd ranked Jamaican on the year and 18th ranked on the world list. He will have to be in or close to his record setting shape of 2014 if he is to regain the National Title he won in 2012.

Riley will be hoping to to make it three in a row as National Champion. He had medal success as a senior at the Commonwealth Games in 2014 when winning the Gold Medal and will be eager to not only book his spot on the team to Beijing but to do so as Team Jamaica’s number one. Riley has gradually worked his way into decent form this season and could have the psychological edge over Parchment having beaten him at ‘Trials’ in 2014 and also when both met in Des Moines in April. The former Calabar High athlete is the number two ranked Jamaican in 2015 with a season best 13.28 (1.5 m/s) in Eugene in May and is 12th on the world list. He has run two faster times than Parchment and will be looking to confirm his recent superiority over the National Record Holder. The 26 year old Riley is the 2nd fastest Jamaican of all time with 13.14.

McLeod is one of the hottest young talents in sprint hurdling on the world stage. His transition from high school track star to the top of the collegiate ladder has been well documented and far from surprising. He served notice to the world in 2013 with record-breaking runs in the 110m and 400m hurdles at ‘Champs’. His two National Junior Records were eclipsed in 2014 but the former Kingston College and Manchester High standout took his record breaking exploits to the American Collegiate level. The 21 year old McLeod has been in scintillating form Indoors and Outdoors in 2015. He not only successfully defended the NCAA Division One Indoor 60m Hurdles title that he won in 2014 as a freshman but did so in style breaking the 18 year old mark on his way to setting a new Championship Record of 7.45. McLeod returned in June to win the NCAA Division One Outdoor 110m Hurdles title with a wind-assisted but very impressive 13.01 (+3.9 m/s). He has the three fastest times by a Jamaican in 2015 and is ranked 7th in the world with a season and personal best 13.21 (+1.7 m/s) run in Des Moines in April. The Arkansas Razorback athlete is seeking his first national senior title on his first attempt and on the basis of form will be hard to deny. His main rivals will be no pushovers.

There is a reason the races are run however and others such as many times National Champion Dwight Thomas and National Junior Record Holder Tyler Mason could play spoilers in the quest for the three spots to the Beijing World Championships.