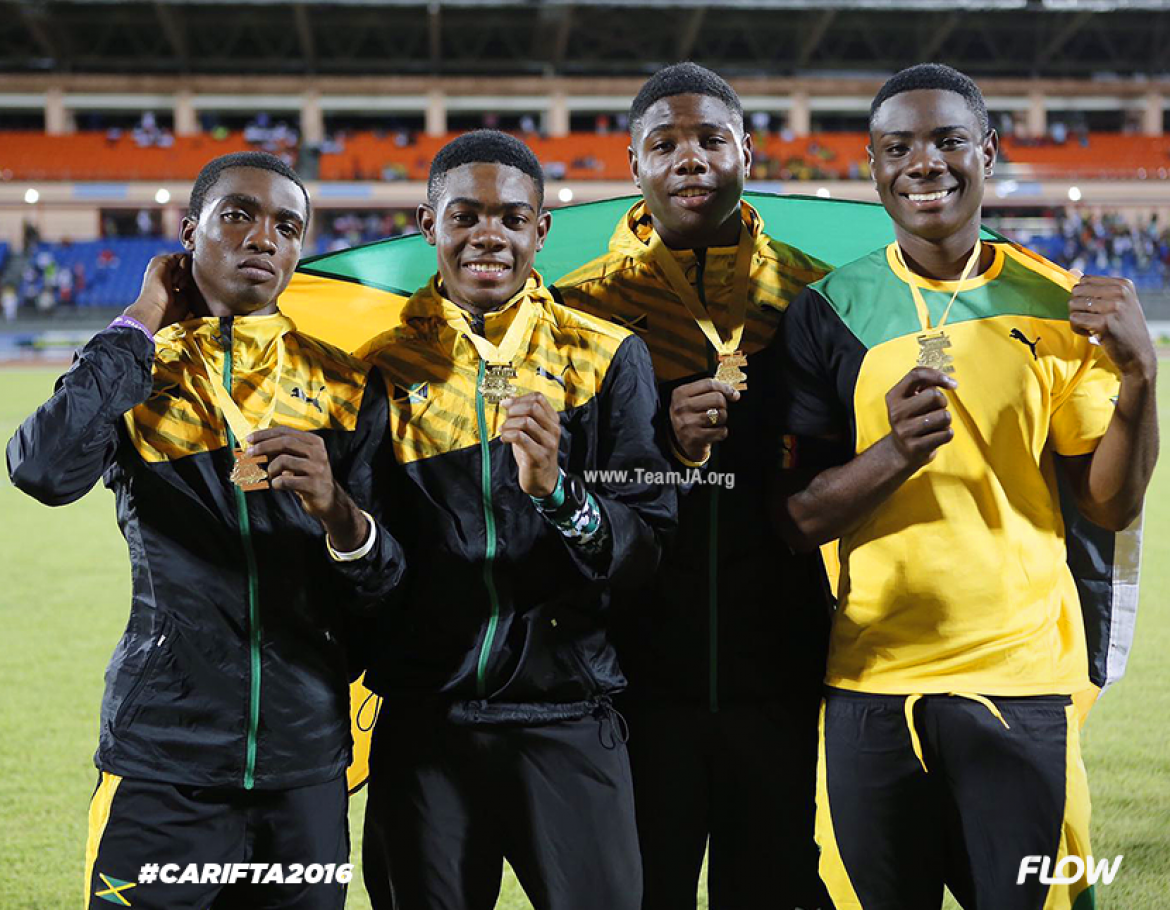 Team Jamaica’s relentless 2016 CARIFTA ‘Gold Rush’ continued unabated on Day 2 of the regional age group track and field championships in St. George’s, Grenada. The medal register continued to click as Jamaica’s athletes dominated with stellar performances across most events decided on
the second day. At the end of Day 2, Jamaica had amassed 55 medals consisting of 26 Gold, 18 Silver and 11 Bronze.

Jamaica had to wait a while to complete the coveted sweep in an event and when it finally materialized, no surprise, it came in the sprint relays. The U18 Girls were first to strike with the quartet of Mischae Harriott, Daszay Freeman, Shaneil English and Kimone Shaw won in 45.87 ahead of Bahamas and Trinidad and Tobago.

The high-powered foursome of Michael Stephens, Christopher Taylor, Jhevaughn Matherson and Dejour Russell were in a race with the clock breaking the record with a blistering 40.44. Bahamas was second, a city block behind in 41.42 with home team Grenada taking a surprise Bronze with 41.89.

The U20 Girls and Boys cohorts were just as dominant. The team of Patrice Moody, Kimone Hines, Shanice Reid and Rushelle Burton scored a facile win in a decent 44.30. Bahamas (45.62) and Trinidad and Tobago (46.68) rounded out the podium spots.

The Jamaican line-up for the U20 Boys suggested another runaway win and the outcome was as scripted. Rohan Cole, Nigel Ellis, Raheem Chambers and the towering Akeem Bloomfield on anchor scorched the track on their way to stopping the clock at 39.74 leaving in their wake Bahamas (40.27) and Barbados (40.97)

Jamaica won three of the four 400m hurdles races including the two girls events in record times. The brilliant Shannon Kalawan picked up where she left off at ‘Champs’ and was simply racing against the clock as she won in 56.29 to break the 13 year old record of 56.61 set by another Jamaican, Camille Robinson. Jamaica’s 2nd competitor in the event, Nicolee Foster was 3rd in 58.34.

The U18 equivalent saw Shiann Salmon securing her 2nd Gold medal as she out-finished teammate Sanique Walker to win after a stirring duel in deep stretch. Salmon returned a time of 59.50 to eclipse the one year old mark of 59.55 set by Junelle Bromfield. The gallant Walker was 2nd in 59.60.

The U20 Boys 400m hurdles saw Jamaica’s Timor Barrett proving strongest to win in 51.79 ahead of Rivaldo Leacock of Barbados (52.07) with Jauvaney James getting 3rd in 53.56. Dashinelle Dyer of Jamaica finished 3rd behind the Barbadian pair of Rasheeme Griffith (52.22) and Nathan Ferguson (53.56) in the U18 division.

Team Jamaica picked up three more quinellas in the field events. Britany Anderson (6.02m) and Annia Ashley gave Team Jamaica a 1-2 finish in the U18 Girls Long Jump while Zico Campbell threw 17.75M to break the year old 17.56 to win the U18 Boys Shot Put ahead of his compatriot Rasheeda Downer (17.57m). Shanice Love had no equal in the U20 Girls Discus with a best mark of 52.05M with teammate Devia Brown (46.66m) gaining the Silver.

Aiko Jones added to her bronze medal in the U18 Shot Put by winning Gold in the Discus with a personal best 46.49M. Tissana Hickling (12.17m) had four foul jumps in the U20 Girls Triple Jump but was able to claim her 2nd Bronze medal. The Jamaican pair of Janell Fullerton and Zinedine Russell made it another 1-2 for Jamaica in the Heptathlon. Fullerton was winning her 2nd Gold medal of the championships while Russell was winning Silver for the 2nd consecutive year.

Dane Smith made sure to add his name to the list of Gold medal winners with victory in the Pole Vault. Obrien Wasome (7.52m) and Shawn-D Thompson (7.45m) added to the medal chest in the Boys U20 Long Jump. Kobe-Jordan Rhooms was awarded Silver on count-back in the U18 High Jump. Marcus Brown completed two days of grueling competition in the Octathlon, securing the Silver medal.