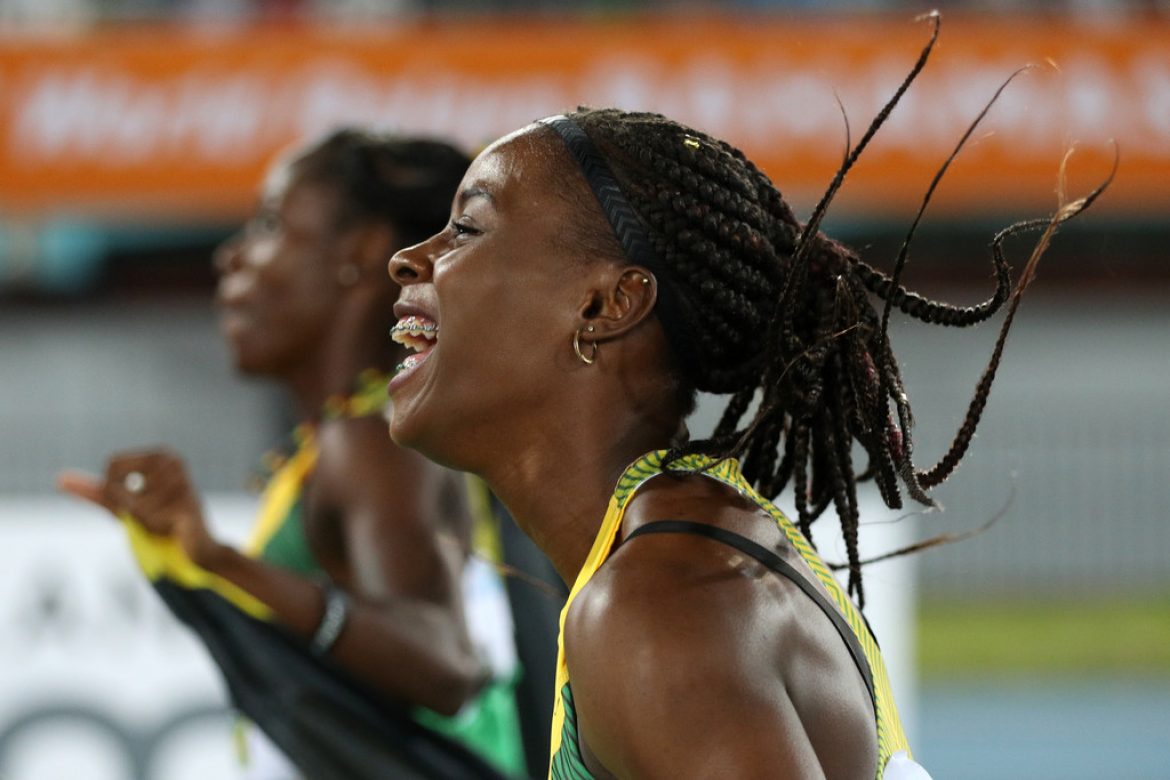 The curtains came down on another IAAF World Relays with Jamaica finishing second in the team standings behind runaway winners the USA. The Jamaicans failed to defend their Women’s 4x100m and Men’s 4x200m titles but finished with five medals (4 Bronze, 1 Silver) to add to the 4x200m Gold won on the opening day. The USA retained the Golden Baton with 60 points over Jamaica (39) and Australia (24).

Simone Facey, Natasha Morrison, Gayon Evans and the exciting Sashalee Forbes on anchor secured Silver in an eventful 4x100m final in a season’s best 42.95. Forbes who replaced Christania Williams in the final received the baton in third but despite closing, failed to overhaul Germany who created the big upset to win in 42.84. The People’s Republic of China was a surprise third in 43.11. Favourites the USA crashed out on the first leg with regular starter Tianna Bartoletta tripping and falling to the track.

The USA may have won the Golden Baton but the most memorable moment of the two days was the mixed 4x400m which made its debut at the Championships. In a fitting finale that could not have been scripted any better, Team Bahamas with rapturous cheers from an expectant crowd triumphed in an epic encounter to close what was another successful staging of the event.

It was the first ever Gold medal at the event for the host nation which paraded an all star team of 400m world leader Steven Gardiner, Olympic Champion Shaunae Miller-Uibo, Anthonique Strachan and Michael Mathieu. They won in a time of 3.14.42 over the USA (3.17.29) and Jamaica (3.20.26). The Jamaican team was comprised of Javere Bell, Ristananna Tracey, Natoya Goule and Jammari Rose

Team Jamaica with the quartet of Janieve Russell, Anneisha McLaughlin-Whilby, Verone Chambers and Stephenie-Ann McPherson put in a brave display but were run out of it close home for the Silver by Poland. The event went to the USA in a world leading 3.24.36 as the Americans completed a hat-trick of wins at the IAAF World Relays.

Poland (3.28.28) and Jamaica (3.28.49) recorded season best times to complete the podium spots. Christine Day and Dawnalee Loney ran in the heats for Jamaica who was winning its third medal in the Women’s Mile Relay following Silver in 2014 and 2015.

Jamaica had failed to medal in the Men’s 4x400m at the two previous editions of the World Relays and the odds against them doing so in 2017 had lengthened appreciably given the absence of the inspirational Javon Francis who ran in the heats. The team of Peter Matthews, Demish Gaye, Martin Manley and Stephen Gayle on anchor defied the odds with a very good performance to claim their first ever medal.

The quartet ran with guts and heart on all legs in perhaps the most thrilling race of the World Relays. The event went to the USA in 3.02.13 as Lashawn Merritt on anchor out-battled a determined Karabo Sibanda of Botswana with a gallant Gayle fighting all the way to secure Bronze for Jamaica. Botswana (3.02.28) and Jamaica (3.02.86) recorded season best times. Javere Bell who also ran in the heats was the lead-off leg for Jamaica in the Mixed Relay.

Jamaica came into the 2017 IAAF World Relays seeking a hat-trick of wins in the 4x200m but it was pretty evident from early that it would be a tall order. The team of Nickel Ashmeade, Oshane Bailey, Rasheed Dwyer and Yohan Blake finished 3rd in a season’s best 1.21.09. Warren Weir who ran in the heats was replaced by Blake in the final.

The event went to Canada led by the impressive Andre De Grasse in a World Leading 1.19.42. USA finished in the runner up spot with their best time of the year (1.19.88).

The Women’s 4x100m ‘B’ finals went to Ecuador in 44.26. Canada who finished second was disqualified and the British Virgin Islands failed to get the baton around.