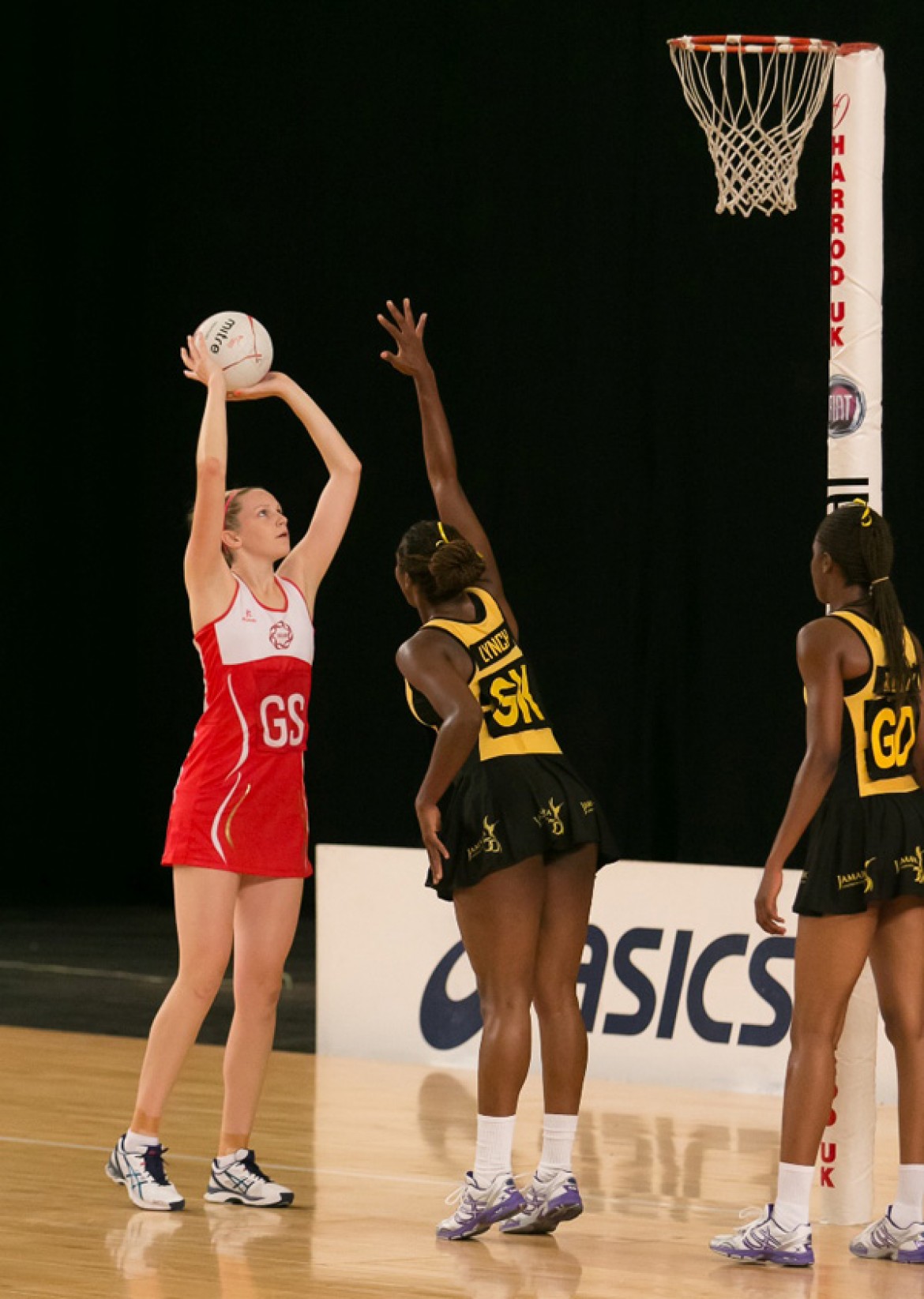 England eventually came out on top in an engaging contest in Birmingham as a rampant fourth quarter took the game away from the visitors. The home side edged ahead in the first half and were five goals ahead before the Sunshine Girls surged back to level the tie with fifteen minutes left on the clock. Anna Mayes’ team responded with a scoring salvo in the final quarter, nailing twenty shots from twenty to chalk up a comfortable victory.

The opening quarter started with both sides easing into the game with a sense of trepidation on court. It was certainly apparent that it was an early season game for the hosts as they made tentative inroads into their opposition. Romelda Aiken opened the scoring and a quick turnover from the Jamaican defence had them sniffing an early lead but excellent work in the England mid-court made sure that Joanne Harten levelled. Midway through the quarter and the match was tied at 7-7, a fair reflection of the action on court.

As the quarter wore on, the hosts looked the more likely to seize an early advantage with Sara Bayman and Sasha Corbin combining to great effect and feeding the shooters with clinical accuracy. At the other end of the court Anna-Kay Griffiths was working well with Aiken as she allowed her more illustrious partner the opportunity to increase her goal tally. A late misplaced pass from the Sunshine Girls allowed England to open up a lead and Harten took the chance with aplomb, the hosts were 13-11 ahead at the end of the first quarter.

It was an equally open start to the second quarter as England opened the scoring and move forward with added diligence and fluidity. Quick hands from Corbin found Harten in space to finish off a particularly stylish move. The Jamaican side were reverting to the long pop-up ball with Kimone Tulloch finding the rangy Aiken to capitalise. Eboni Beckford-Chambers and Ama Agbeze were bustling around the circle with good effect but the long ball was still proving a productive tactic for the Caribbean side.

The two teams were locked on centre pass at 23-21 with five minutes of the half remaining. The trio of Corbin, Bayman and Pamela Cookey again linking well with quick movement and sharp passing unlocking the visiting defence. As the interval approached, England took control of the game and through some excellent defensive work from Serena Guthrie, they produced steady turnovers to pull ahead. A lapse in concentration allowed Jamaica to respond twice in the closing seconds, but the hosts would have been happy with their 31-26 advantage.

The coaches decided against making any changes at half-time and this tactic seemed to backfire as the Sunshine Girls scorched back into the game with Jhanielle Fowler joining Aiken in the circle to make a twin towers attack. England were struggling to get the ball through the mid-court as some excellent pressure from Tulloch and Vangelle Williams gave the Jamaican’s the foothold back into the game they were desperately seeking.

Barely six minutes of the third quarter had elapsed before the Jamaicans squeezed into the lead, the home crowd grew audibly anxious. England responded and the momentum started to swing more than a roundabout in a hurricane as both sides rose to the occasion. It was getting hard to hear the whistle amongst the fervour being generated in the arena. The titanic tussle continued with interceptions, contact calls and silky shooting all on the increase. A last second finish from Aiken drew the teams level at 43-43 with fifteen minutes remaining.

It was a case of the seven on court being left to undo the damage of Q3, as Anna Mayes kept faith in those that started the match. It was to be a great test of England’s character in the final quarter. Early exchanges of scores quickly gave way as the home side started to dominate proceedings. Harten was firmly in the zone and having impressed with her agility, movement and composure all night, she was pulling her side accros the winning line.

The England defence started to pluck out the increasingly desperate long balls into the circle with Agebeze making more than her fair share of intercepts. With five minutes to go the gap had opened to eight at 56-48. The fans were roaring with delight as each goal moved England closer to securing an opening win in the Series.

As the result became more certain the hosts attack started to receive closer attention from the Jamaican defence, but at this stage the experience of Cookey and the form of Harten would not allow them to be ruffled. A last minute intercept from Sasha Gay-Lynch encapsulated the spirit of the Caribbean team but it was quite fitting that the last word would lie with Harten. The ice cool attacker sunk one last goal as the final whistle sounded to bring the crowd to their feet and cap a fine opening display for England.