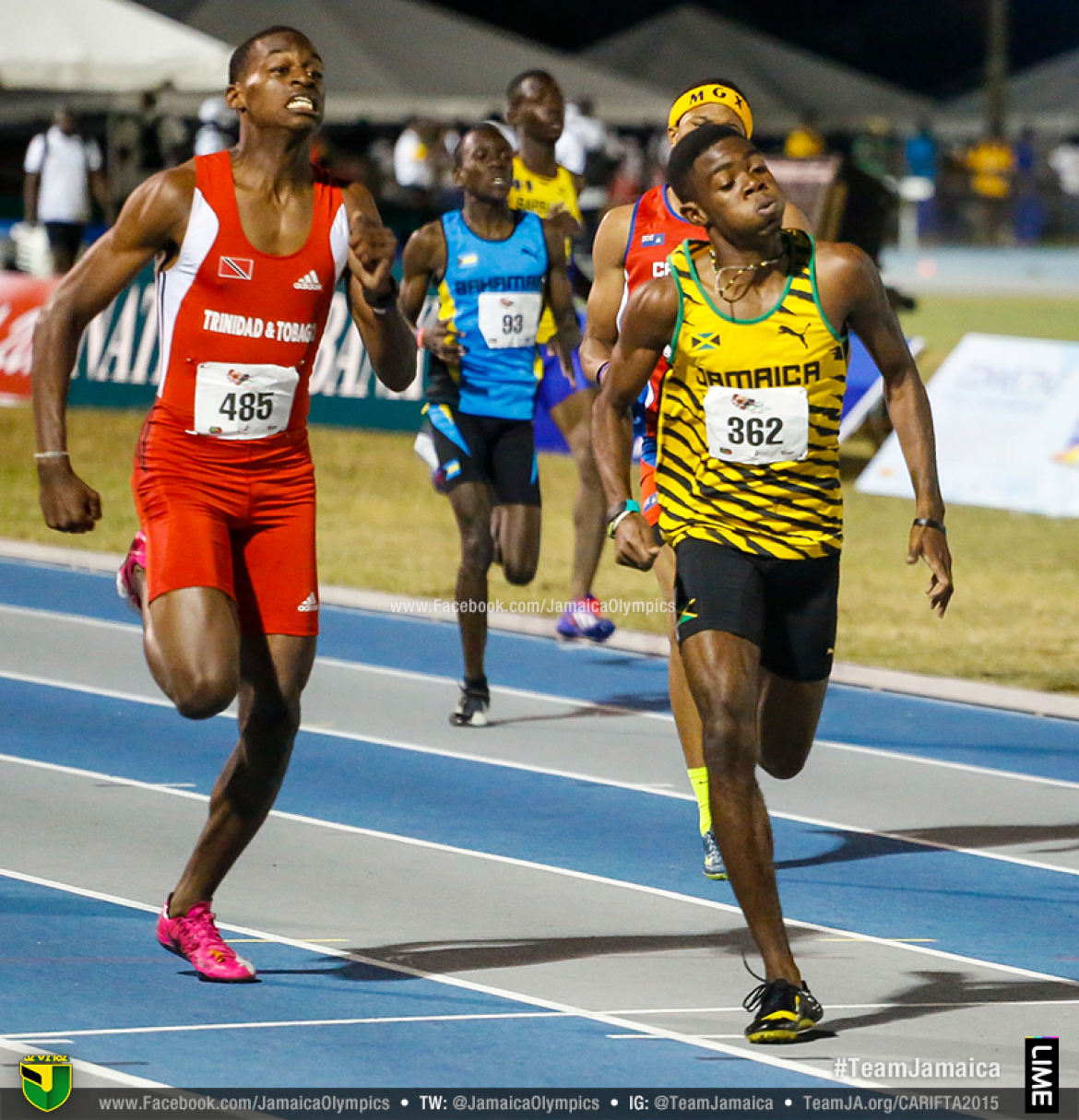 Team Jamaica’s GOLD RUSH accelerated as expected on Day 2 as the CARIFTA Games continued with 17 finals being decided. Jamaica closed the day with 15 Gold, 6 Silver and 9 Bronze for a total of 30 medals.

National Junior Record Holder for the High Jump, Christoff Bryan was in a class of his own as he made up for his 2nd place finish last year by winning the U20 Boys High Jump and in the process equaled the Games Record of 2.21M. Laquarn Nairn of the Bahamas was the runner up clearing 2.14M. Ace Louis of St. Lucia edged defending champion Clayton Brown of Jamaica on count-back for the Bronze after both cleared 2.11M.

Bryan was disappointed at not getting the record after three failed attempts at 2.24M but indicated in an interview with Jamaica Olympics that the wind wasn’t a bother and that it was more ‘competition rust’. Bryan when asked about his plans for the rest of the season said he wanted to ‘make the finals at the IAAF World Championships and to jump at least 2.30M by the end of the season’.

Lushane Wilson’s great season continued as he retained his U18 Boys High Jump title clearing 2.11M. He had already secured the Gold medal at 2.08m as his nearest rival failed to clear at that height. Jermaine Francis gave the local crowd something to cheer about as he finished 2nd with a clearance of 2.06m.

Demar Gayle’s 3rd round throw of 53.45M was enough to secure Gold in the U20 Boys Discus. Josh Boateng of Grenada and Drexel Maycock of the Bahamas grabbed the other podium finishes with 51.14M. Jamaica’s other competitor Sanjae Lawrence was bothered by foul trouble with his best of 49.36M good enough for 4th. Sahjay Stevens not only won the U18 Girls Shot Put but in the process set a new CARIFTA Record of 16.31m. Akidah Briggs of Trinidad and Tobago and Laquell Harris of the Bahamas were the other medalists. Devia Brown who won the Discus on Day 1 experienced foul trouble and finished 6th with a best of 13.56M.

The exciting 15 year old phenom Christopher Taylor (46.64) was truly tested for the first time this season but showed his championship mettle by repelling a strong late charge from Jacob St. Clair of Trinidad and Tobago (46.73) to win Gold. Devaughn Ellington (47.43) went out hard and rallied late in the event to share the Bronze medal with Jamal Walton of the Cayman Islands. Taylor’s time eclipsed the one year old record of 47.26 set by Henri Deluze of the Bahamas.

Golden run by Bloomfield, Silver and Bronze for Loney and James

For the second consecutive CARIFTA Games Dawnalee Loney (53.58) found one too good in the U20 Girls 400m as her late charge could not peg back the Bahamian Shaquania Dorsett (53.40) who went out fast and found enough in deep stretch to hold the Jamaican at bay. Tiffany James found the early pace too hot to handle but was resolute in the drive for home to claim the Bronze in 53.71.

Red hot favourite and National Junior Record Holder Akeem Bloomfield had company in the straight-away but lengthened his strides to convincingly secure yet another Gold medal for Team Jamaica clocking an impressive 45.85. Rai Benjamin of Antigua and Barbuda took the Silver in 46.19. Bloomfield’s team-mate Terry Thomas gave his usual honest effort but failed to get among the medals finishing 6th in 48.38.

Team Jamaica’s girls ensured the 100m titles for both categories stayed in Jamaica. ‘Champs’ quadruple Gold medalist Natalliah Whyte battled hard to overhaul rivals to take the Gold in the U20 section in 11.56 (+0.5 ms) ahead of the Bahamian pair of Keianna Albury (11.64) and Jenae Ambrose
(11.74). Team-mate Renee Medley had her worst race of the season and failed to make the finals. Another ‘Champs’ standout Shellece Clarke beat a very competitive field in the U18 division. Clarke won in a personal best 11.50 (+1.3 ms) ahead of Tristan Elvyn of Barbados (11.54). Jamaica’s other representative Shaneil English (11.63) shared the Bronze medal with Brianne Bethel of the Bahamas.

Jamaica’s Boys failed to win a Gold medal in either age group final of the 100m. Tyreke Wilson and Xavier Angus could not get close to threaten the winner Javan Martin of the Bahamas who won in a personal best 10.41 (+0.3 ms). Wilson’s 10.47 was good enough for the Bronze. Angus was 5th in 10.60. Michael O’Hara had another of his all too familiar slow starts but would have been hard-pressed to beat Gold medal winner Mario Burke of Barbados who was unchallenged cruising home in a nippy personal best 10.21 (+1.5 ms). O’Hara (10.33) and compatriot Raheem Chambers (10.44) claimed the other podium spots.

Shemar Salmon kept Jamaica’s Gold medal count rising with a win in the U18 Boys 1500m. Salmon won in 4.02.98 with compatriot Keenan Lawrence (4.04.98) closing late for the Bronze medal. The Silver medal went to Jonathan Jones of Barbados. Jamaica claimed Silver and Bronze in the U18 Girls 1500m. Britnie Dixon (4.44.39) and Jeima Davis (4.50.64) were valiant in defeat but found Mary Fraser of Barbados in a mean mood as she comfortably secured the Gold medal in 4.41.44.

It was a Team Jamaica exacta in the U20 Girls 1500m with Lisa Buchanan (4.39.50) taking the Gold medal ahead of Sasha-Gaye White (4.40.66). The boys’ equivalent was won in fine style by another Black, Green and Gold clad athlete with Shevon Parks (3.56.69) turning back the strong challenge of the Barbadian duo of Raheem Skinner and Joshua Hunt. Parks’ team-mate Daniel Glave finished 6th.

Ave-Anna Venair made up for her unplaced effort in the U18 Triple Jump to claim the Bronze medal in the Long Jump with a mark of 5.66m. Gold went to Charisma Taylor of the Bahamas (5.93M) over Kieshonna Brooks of St. Kitts and Nevis (5.72M). It was Silver and Bronze for Jamaica in the U18 Boys Shot Put courtesy of Kevin Nedrick (17.44M) and Kyle Mitchell (17.03M).

No Medals in U18 Javelin Girls and U20 Girls Long Jump

Sahjay Stevens and Devia Brown failed to medal in the U18 Girls Javelin throw finishing 5th and 8th respectively. It was the same in the U20 girls Long Jump with Tamara Moncrieffe (4th) and Trishauna Hemmings (7th) failing to add to Jamaica’s medal count.

Outgoing World Youth Champion Marvin Williams booked his spot in the U20 Boys 400m hurdles final after winning his semi-final with consummate ease. Williams was the fastest qualifier with 52.50 seconds. World Youth Champion and National Junior Record Holder Jaheel Hyde was out for an early morning stroll as he comfortably won his semi-final in 53.59 seconds, the 3rd fastest time heading into the finals scheduled for Sunday. The other top qualifiers were Stephen Griffith of Barbados (53.23) and Xavier Coakley of the Bahamas (54.12).

Team Jamaica’s representatives were doing well after four events in the multi-event Octathlon and Heptathlon Open. Shakiel Chatoo was in the top three in the Octathlon for Boys while Zinedine Russell and Ayesha Champagnie were also nicely positioned to fight for medals in the Heptathlon.