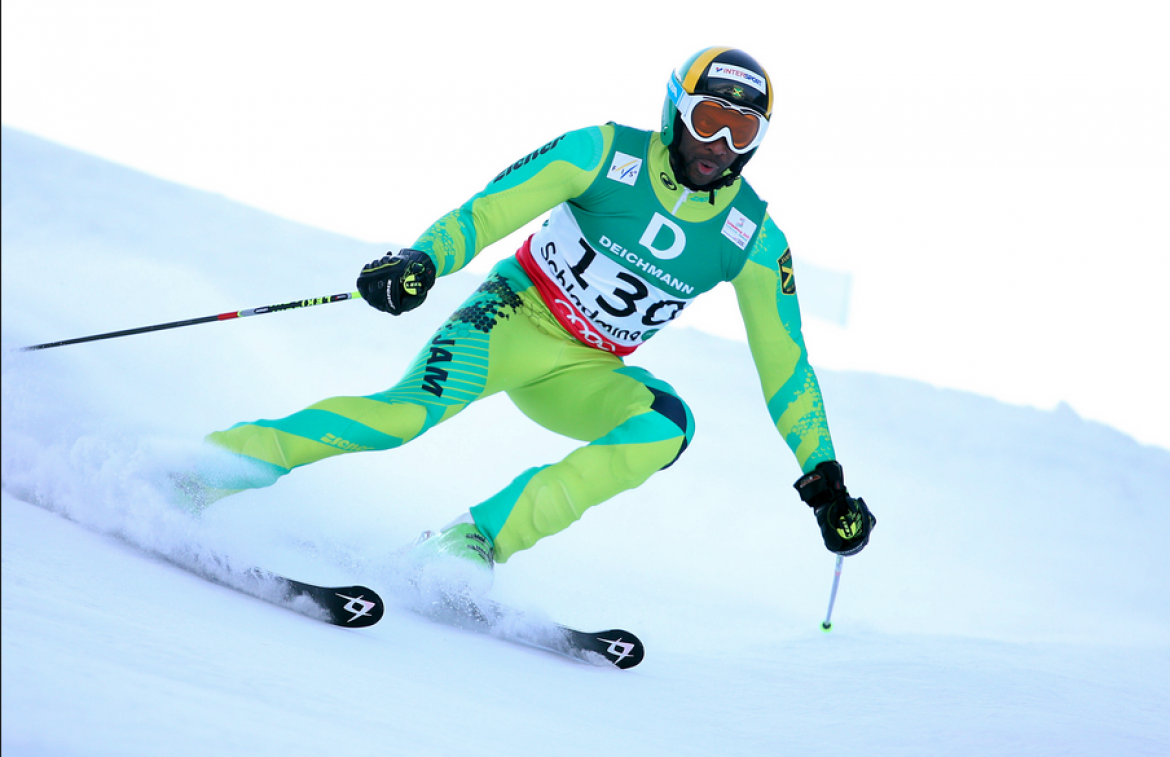 Michael Williams only discovered skiing by accident. As an 18-year-old of Caribbean descent living in Canada, he had turned on his TV to watch the celebrated Jamaican bobsled team at the 1988 Winter Olympics in Calgary, but got hooked on skiing as well. He loved the way Alberto Tomba of Italy and Pirmin Zurbriggen of Switzerland glided down the slopes.

“I wanted it too,” Williams, now aged 45, says of the revelation on his blog page, called ‘Jamaican Dream Chaser’. “I wanted to be called ‘Blackman Zurbriggen.’ I wanted to be a beast on the slopes like he was.”

Over time the dream faded; Williams excelled instead at American football and even played professionally for a while in Europe as a quarterback and receiver.

Late starter on the slopes

Only at the age of 43 and when settled into a family life in Germany, did Williams finally decide he wanted to take up skiing competitively.

“The first reaction I get when I tell people I’m a skier from Jamaica is always about Cool Runnings,” Williams said to reporters at the alpine skiing world championships in Colorado this week, referring to the Disney film which dramatized the tale of the Calgary Olympic bobsledders.
Bildergalerie Winterspiele 2014 außergewöhnliche Teilnehmer

The celebrated Jamaican bobsled team were in action again at the Sochi 2014 Winter Olympic Games.

Williams, though, has been enjoying quite an adventure himself.

Born in Montreal to a Jamaican mother, he has lived in Germany since 2006 and works as a sales manager for a Swiss watch company, while raising a 16-year-old son.

Although funded by the Jamaican Ski Team he has not had much time to prepare for Beaver Creek, and must make do with traveling each weekend from his home in Frankfurt to Austria to squeeze in some training.

“Usain Bolt may be the fastest man on land, but I’m the fastest Jamaican on snow,” joked Williams when asked if his popularity on the Caribbean island now rivals that of the 100- and 200-meter world record holder.

In the beginning, he could barely snowplow his way down the mountain, but by the end of his first year on the slopes Williams was representing Jamaica at the 2013 World Championships in Schladming, Austria. Although he finished last in the giant slalom and third-last in the slalom, he was proud of his achievement as only three weeks earlier he had torn the cruciate ligament in his knee.

On Friday, a fully-fit Williams again finished last in the GS after clocking a time of one minute, 53.82 seconds in his first qualification run – over 54 seconds behind the leader.

Not only that, he lost the “competition within a competition” he had going with Haitian skier Jean-Pierre Roy over who would clock the quicker time. Roy finished 20 seconds ahead of Williams in second-last place, meaning the Jamaican had to make a donation to the other’s foundation.

“I’ve skied fairly decently for a guy who’s only been out here a couple of years,” said Williams of his reasons for continuing to ski despite his poor record in events. “I wanted to show my son that it’s okay to chase dreams.”

Williams will have one more shot at the impossible dream on Saturday in the qualification runs for the slalom event.