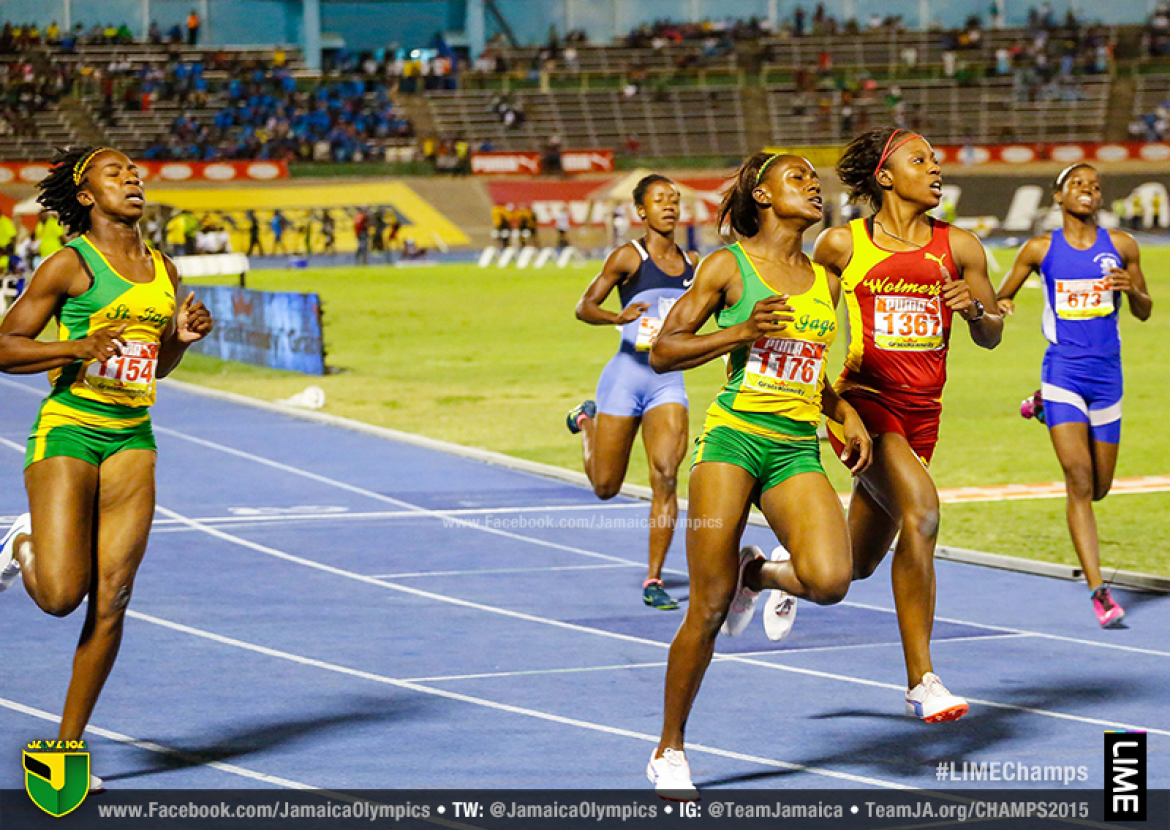 Edwin Allen High kept on course to defend their title closing Day 4 on top after some dramatic and keenly contested action on the track and in the field events. The Frankfield based institution enters the final day in the driving seat but history has taught them that complacency is not an option. Despite the resounding win in 2014, the demons of 2013 have not been completely exorcised as back then the school closed the penultimate day in front before failing to withstand a late charge by a rampaging Holmwood Technical.

The very versatile Tamara Moncrieffe of Holmwood Technical (13.63M -Triple Jump Open) shook off the disappointment of the High Jump to write her name in the record books after eclipsing the 8 year old mark set by 2014 Commonwealth Gold Medalist Kimberley Williams of Vere Technical back in 2007. Moncrieffe also had a massive wind-aided effort of 13.92M.

The Class Two 1500m was perhaps the most competitive event of the day as a well-timed run by Ashanni Robb of Edwin Allen (4.40.73) saw her nipping Holmwood’s Chrissani May by 2/100th of a second with Britnie Dixon of Vere Technical further back in third.

St. Jago showed their strength in the short sprint winning the Class Three title with Kimone Shaw (11.80) who prevailed over the diminutive Kiara Grant of Convent of Mercy Academy (Alpha) and the Class Four title via the tall, far striding Joanne Reid. Shellece Clarke of Edwin Allen prevented a
St. Jago clean sweep by easily winning the Class Two equivalent. The smooth running, high stepping Clarke who has one of the best techniques in high school sprinting won in 11.82 seconds to complement her wins in Classes Three and Four in previous years.

Genekee Leith of St. Jago may have benefited from Peta-Gay Williams’ fall in 2014 when she won the 400m Hurdles Open but the defending champion turned on the afterburners to close from what appeared to be a hopeless position, exploding over the last hurdle to win in 58.37 seconds ahead of Shian Salmon of Hydel and Ranae McKenzie of Manchester High. Mckenzie’s twin sister Shanae made it a great day for the family by winning the Class One High Jump title.

Edwin Allen High has the strength in numbers and quality going into the final day but will still have to put every foot right to ward off the gallant Hydel High and a surging St. Jago High. Former champions Holmwood Technical and Vere Technical will play spoilers.