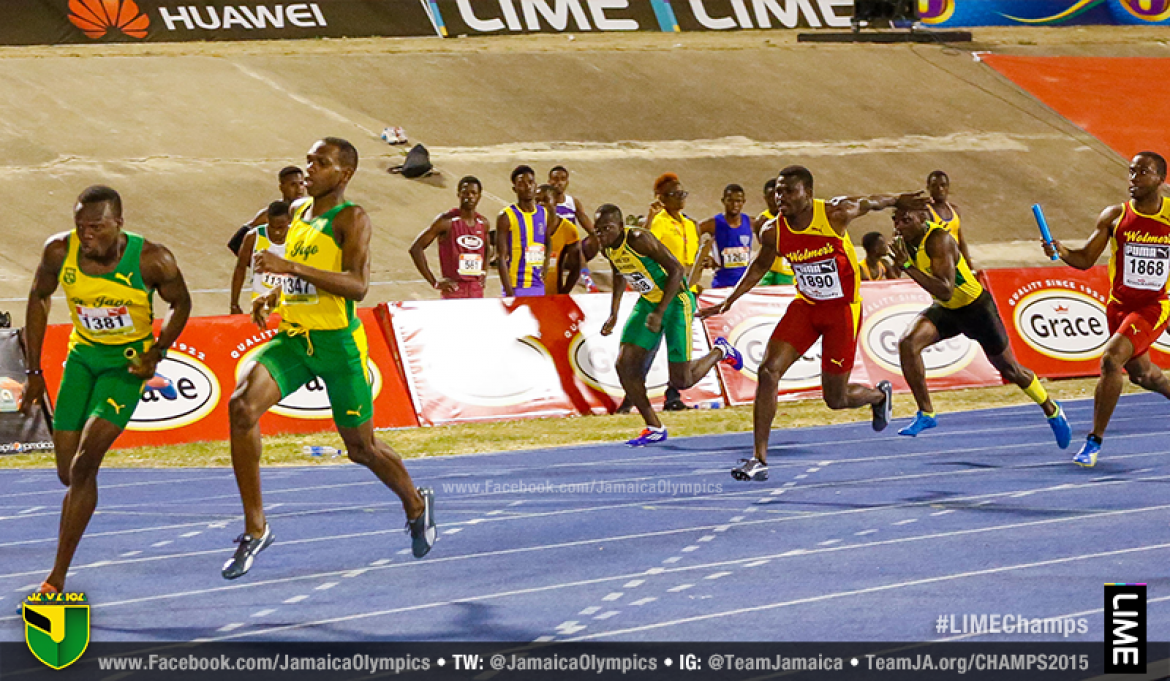 Many, especially the throngs of Calabar supporters believe its all over bar the shouting with only an unlikely calamitous collapse on Day 5 standing between the Red Hills Road standard bearers and their 4th consecutive lien on the Mortimer Geddes Trophy, the coveted symbol of boys high school track and field supremacy in Jamaica.

Calabar is indeed in pole position after Day 4 and with a 23 point lead and the calibre of athletes the school has in finals on Day 5, one cannot fault those who believe its over. Supporters of a rejuvenated KC believe that they can steal the title on the last day having secured quality entries in many of the finals on the last day.

Calabar is set to score heavily in the sprint hurdles with Michael O’Hara and Seanie Selvin in Class One, favourite Dejour Russell and Alex Robinson in Class Two and Craig Brown in Class Three. KC doesn’t have the quality in the sprint hurdles but should score well in Class Three with their twin pronged attack of Wayne Pinnock and Tajean Houston. Phillip Beckford is not expected to trouble the top three in the Class Two sprint hurdles but could secure valuable points. KC has two representatives in the Class One final with Roderick Moodie and Levaughn Battick.

The 400m finals could be the crucial battleground. Barring the unforeseen Calabar should win the Class Two 400m via the incomparable Christopher Taylor with their second runner Anthony Carpenter not expected to finish outside the top 4. Calabar has one of the favourites in Class Three with Tajai Jackson but is without an athlete in the Class One final. KC’s Class Three duo of Shanthamoi Brown and Roshaun Rowe could score heavily offsetting gains by Calabar in this Class. The Neil Harrison coached school will draw a blank in Class Two but is expected to secure two of the top 4 positions in the Class One equivalent with Akeem Bloomfield and Twayne Crooks.

A similar scenario should unfold in the 200m across all classes. Calabar should gain maximum 16 points in Class Two with Taylor and Class Three record holder Tyreke Wilson. O’Hara should give Calabar 9 points in the Class One final while Tajai Jackson is again among the favourites in Class Three. KC should answer with Crooks and Shivnarine Smalling in Class One. Tyreke Bryan will carry the KC flag in the Class two finals. Oshane Peart and Roshaun Rowe could again offset any gains by Calabar in the Class Three final.

The oftentimes eventful sprint relay could provide another twist for the main protagonists in what may be a closely contested final day. Calabar’s super Class One team looks poised to retain the title and could face a stern test from KC and St. Jago with all three teams having run sub 40.10 in the semifinals. Calabar’s big Class Two team failed to get the baton around after a disaster on the final changeover and a severely weakened KC team without ace sprinter Jhevaughn Matherson may still be good enough to score heavily in the final. Its advantage KC in the Class Three event. It is the relays however and as we have seen in the heats any slip could prove catastrophic for the championship ambitions of the principals.

Calabar is without a team in the Sprint Medley while KC is highly fancied to win the event. Both teams have representation in the 800m however KC will have 4 finalists compared to 2 for Calabar. The Micheal Clarke coached team will be pinning their hopes on two athletes, Javon-Taye Williams in Class Two and Niquaine Henry in Class Three. KC has Daren Bailey in the Class Three final and Conroy Ellis in the Class Two final. Chad Miller will carry KC’s hopes in Class One.

KC on paper appears to have the stronger mile relay team but one can never count out Calabar in this event especially if 15 year old phenom Christopher Taylor is asked to carry the team on his slim but capable shoulders. It will not be a two horse race however as the likes of STETHS, Petersfield High, Jamaica College and even moreso the powerful St. Jago armada have strong claims to winning the final event of the championships.

How amazing and fitting it would be if this event determined the home of the Mortimer Geddes Trophy for the next 12 months.