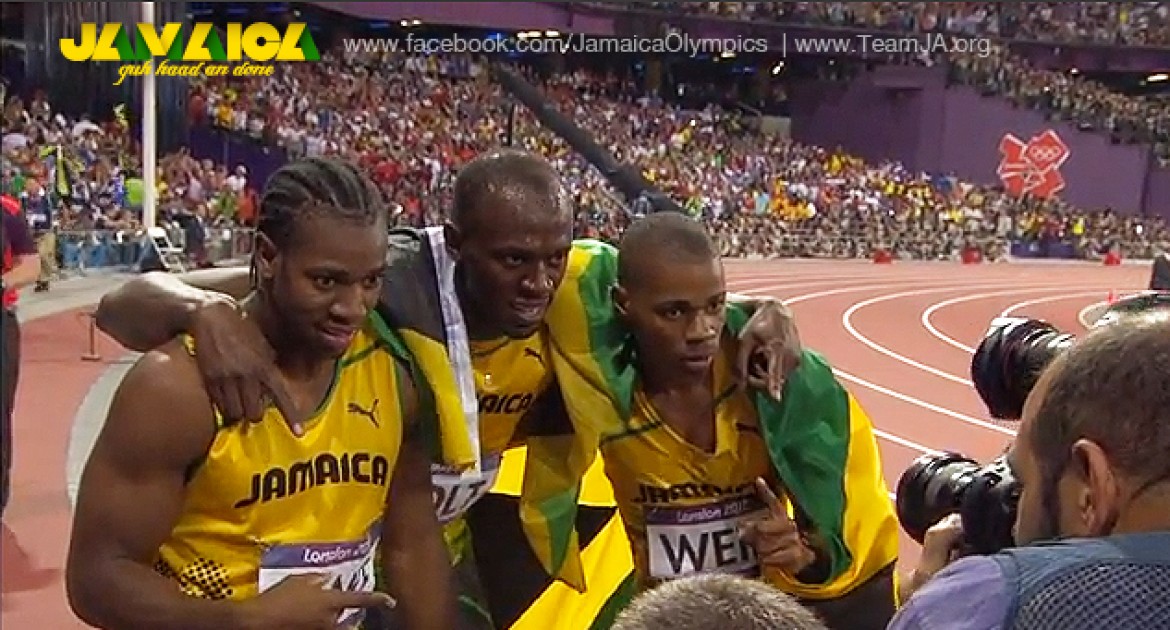 Top of the morning to you from our studio here in Gypsy Hill. Here’s the 200 meters as I saw it and how you shoulda dida see it.

After yesterday morning’s disappointment with the men’s 4×400. By God, we needed something to smile about. We needed the sweep a.k.a. the UMBRELLA. The quinella was not good enough. Mi did lend out mi broom but mi have mop and swiffer as back up just in case. Geenie Floor polish self shine was standing by also.

I became a Usain Bolt addict at World Juniors 2002 in Kingston. Here’s the cliff note version.

Usain Bolt is so “Superble”

Jamaica was hosting the World Junior Championship and 3 days before the close of the championships we were gold medal less. In 2000, at the previous championship in Santiago, Chile we mined 3 gold medals and here we were hosting the championship with no clear star just one bag a supporting players. The gun went off for the women’s 200 meters and Anneisha McLaughlin lead from gun to tape. We had a gold or so we though. She pipped on the line by the British athlete. We were disappointed. 10 minutes and it was time for the Boys 200 meters. A 15 year old youngster in a middle lane got in his blocks and ran a brilliant turn but could he hold off the athletes who were 2 to 3 years older than he was? Not only did he beat the competition, he decimated them.

A STAR WAS BORN

The man owned the stadium that night and Jamaicans showed their gratitude by saluting the tall, skinny young man who brought us glory. Two years later, he set a new the world junior record(19.93). We were standing by for something epic.

It was drama and heartbreak as Bolt exited the Olympics in the first round of the 200. Many thought he was out of his league. He look rusty and I thought well it was good while it lasted.

He started training with Glen Mills at the end of 2004 and we all were standing by again. He made the finals of the 200 meters in 2005. He finished last after pulling up on the turn and jogging to the finishing line. In 2006, he pulled up on the relay leg at Gibson Relays and was booed by the crowd. Unno know how Jamaican people terrible. He withdrew from the Commonwealth Games and ran a few races in Europe later that year. He looked ordinary and again I thought maybe he may win a bronze one day.

In 2007, he contested the 200 meter finals at the World Championship and was a silver medalist. I saw it then, mi see it I said to my friend. Watch him, look at that look he gave Tyson Gay. It says you big eye bwoy, you naw beat me ever again. I goan mek you run and mash up yourself. The rest is history.

Bolt was expected to win because he was Bolt but he had to work for it because of one Yohan Blake. Bolt not only won but dominated the race. The gun went off and Bolt ran like a man possessed. He covered the field on the turn.

Usain Bolt doing the Queen’s wave during warm up

Even the bad mind commentator remarked look at him. He is talking to the girl behind him. She smile so till me coulda see her wisdom teeth wha never come out yet. L.O.L. It ws Bolt’s victory that was most memorable tonight. For me, it was his nurturing trait which I noticed. A young Warren Weir was given the look, the pep talk. That look said it all Bolt had transcended Bolt, the athlete, Bolt, the mentor. This was Bolt, the driver. L.O.L. A fi him bus and him say Warren I want you as the loader man. Of course Blake is the ‘ductor. FARES please. L.O.L. He calmed down Warren Weir and he secured that bronze medal for Weir.

Blake will not be beaten next year. If he had gotten lane 9 he would have been the 200 meter champion. His lacklustre turn running did him in. When he ran 19.26, he ran it from Lane 9. When they fix that part of his race he will not be beaten. This is baptism by fire and the man ready. Well done Yohan, swell done.

Dulette and Miss Winnie called the bronze for Weir. I knew he could do it but I thought he would panic toward the end of the race. Crowd a people after the look and talk from Bolt he knew he had it. This young man performed above everyone’s expectation. They knew he could medal but nobody expected him to deliver the way he did. He has an individual Olympic medal at 22. Remember, Asafa Powell does not have an individual Olympic medal. He did not panic because he was running with the big boys. He was cool under pressure. Very cool.

WRAP IT UP NOW

Prior, to the Jamaican National Trials, Usain was the man to beat. When the talented Yohan Blake beat Bolt it peaked everyone’s interest. This was the Olympics to watch. What Usain Bolt did tonight reminds me of the fact that some people thrive under pressure.

It also reminded me the fat lady singing is not the last song. We can bring een a uku girl fi sing the chune over. Although he rested on his laurels and is a self proclaimed party freak and probably lost too much sleep worrying about missing A.T.I weekend, he held it together and delivered big time. When Melaine cracked and V.C.B. failed to sparkle it reminded you of how difficult it is to keep your motivation. It reminded you not to F with a good thing. Mr.Bolt more than anyone else had distractions and what else was there for him to achieve? Him touch the sky and come back down several times. What he did tonight was a testimony of his dedication to the sport. According to B.B.C. anchor he rescued the sport.

Thank you Mr. Bolt for pulling Yohan Blake and Warren Weir with you. Your selflessness will always be remembered. If you leave now, you will be dearly missed but you would have left us with some wonderful memories. No worry dem wi keep over A.T.I. fi you. You have enough money fi kep it by youself. L.O.L.