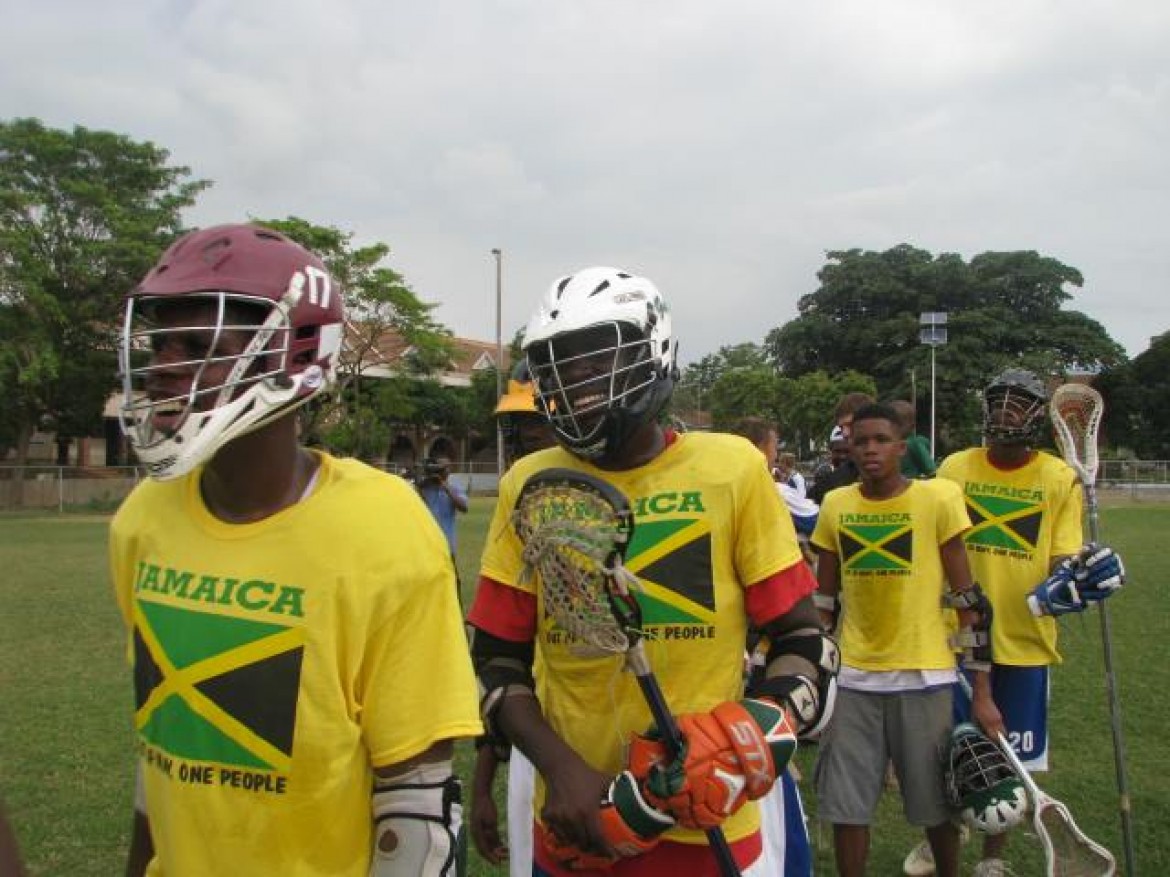 History was made as St. George’s College played host to the first ever Jamaica Friendship Games, which pitted the Jamaica Select U-19 boys team against a squad from the USA that was in Jamaica as part of the Lacrosse Volunteer Corps program run by the non-profit organization, Fields of Growth. The young Jamaicans dropped the match-up by a score of 9-4, but were impressive in their debut going goal for goal with their international counterparts in the second half. The milestone event also featured a women’s demonstration game that included Jamaica’s top high school girls lacrosse players and American volunteers.

The US squad came out sharp and controlled the early part of the game, with long controlled possessions aimed at creating high percentage scoring opportunities while also demonstrating a balanced team offense to all the Jamaicans in attendance. The first half scoring opened midway through the first quarter when Ben and Adam Rosenthal (Union College, Tiburon, CA) connected on a back door cut. The American squad went on to rattle off 3 consecutive goals before Jansen Nicholas (Iroquois Nation) found Adam Ghitelman (Virginia, Cold Spring Harbor, NY) in the waning seconds of the first half, putting the American squad up 5-0 heading into the break.

“I was really happy with the way these young athletes came out and competed in the first half,” said Miles Makdisi, who coached the Jamaican squad and is currently living in Kingston where he serves as the Program Director for Fields of Growth. “There was a lot of excitement, local media attention and a sense of history… all of which contributed to the players feeling a little nervous anxiety at the beginning of the game, once they settled in they really held their own.”

The second half saw a more relaxed and confident Jamaican squad battle the visiting team goal for goal. Brandon Rhoden (Holy Trinity High School) led the attack for the young Jamaicans pumping in 3 goals and creating many more good looks that were denied by hot American goalie Will Dadouris (St. Gill Bernard.) Meanwhile the Jamaican midfield was led by the impressive play of two-way middies Greg Powell (Denham Town HS) and Ricardo Scarlett (Kingston College HS). Powell is a throwback middie that proving to be a serious up and coming player to watch as he dominated play at the face-off circle, played tough between the lines and pumped in a goal on the offensive end.

“I’m proud of the team spirit the squad showed in the second half. We had kids from schools and neighborhoods all over Kingston on this squad. Many of these kids would not be talking to each other if it was not for lacrosse – so to see them bond together and play the US squad to a 4-4 game in the second half, that is a great testament to the potential lacrosse has in Jamaica and the power sport can have to bring people together,” said Makdisi.

For others in attendance, like Coach Donald Wilson a Jamaican American from Bridgeport, Connecticut, this game served as a surreal moment with historical significance, “For me this is like a dream coming true before my very own eyes. My family (Wilson’s son Josiah and daughter Nijah also participated in the event) has been blessed to experience the beauty of this game and have benefited from the positive impact it has had on our lives in American. To now be in a position where we can share it with my home country of Jamaica is just amazing.”

And still for others in participation like Adam Ghitelman, who coaches at Harvard, plays professionally for the Charlotte Hounds and starred as a 4X all-American at Virginia, this experience was all about power of passion and relationships, “The passion we feel for the game of lacrosse is what has really compelled us to want to grow the game in Jamaica, but the relationships I have made through this experience is what will keep me coming back.”

On the girl’s side of the experience at the Jamaica Friendship Games the teams were mixed, putting Jamaicans and Americans on both teams in a short demonstration scrimmage for the Jamaican sporting community. Deja Ricketts (St. Hughs HS) led the way with a game high two goals to lead Team Bolt to a 3-2 win over Team Lightening.

“This lacrosse camp has been the highlight of my summer and I am looking forward to starting the school year and helping form the team at my high school,” said Ricketts.

The first annual Jamaica Friendship Games served as the culmination of a summer filled with lacrosse and development in Kingston. The Lacrosse Volunteer Corps program ran a summer long lacrosse camp serving over 150 aspiring lacrosse players in Kingston, Jamaica. Visiting camp counselors ranged in age and experience from Division I coaches to aspiring high school athletes. Together, as part of the Lacrosse Volunteer Corps program, they set the stage for what is expected to be an exciting school year as a fall league has been planned and an official spring season is being planned.

Photos and article via -Jamaica Lacrosse-