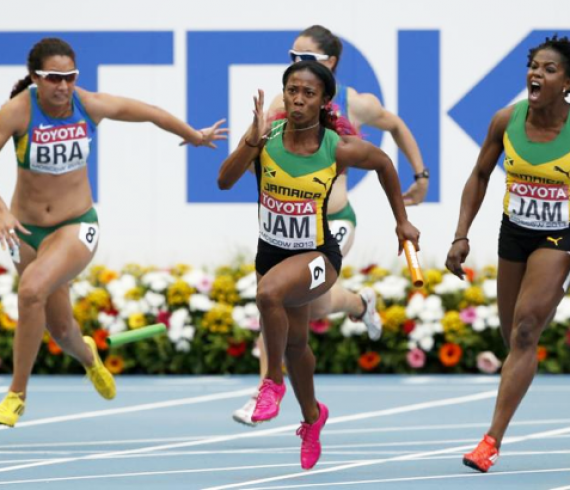 by admin· May 24, 2014· in Jamaica, JO Articles, News, Rio 2016, Track and Field· 0 comments tags: IAAF World Relays, Team Jamaica, Watch IAAF World Relays LIVE Stream
JOE SPEAKS Only an disaster of epic proportion can stop Jamaica from winning 3 definite gold medals with two additional almost in the bag. Wait, zip up the bag please.   I PREDICT GOLD FOR JAMAICA IN WOMEN’S 4X100 A botched exchange or dropped baton and it will not happen in the name of Jesus. Somebody bring me my church fan and my iced tea. Glory. L.O.L. No relation to Glory Alozie. DWL. As I said if we run Carrie to Stewart to Annie to Shelly then we win easily. MEN’S 4X100 Easy does it for this one. I am sure our junior team could beat the U.S. Again barring drama we should win easily. MEN’S 4X200 The world record could go but it’s too early in the season and everyone isn’t race sharp. It all depends on the lineup. Do I hear whispers from the penny section that they should add the 4X200 to the Olympics and World Championships? Talk up di tings. POSSIBLE GOLD WOMEN’S 4X200 It will be tough if we use the same four girls from the 4X100 to run in the 4X200. If both were straight finals then I would say hell yeah. A […] Read More 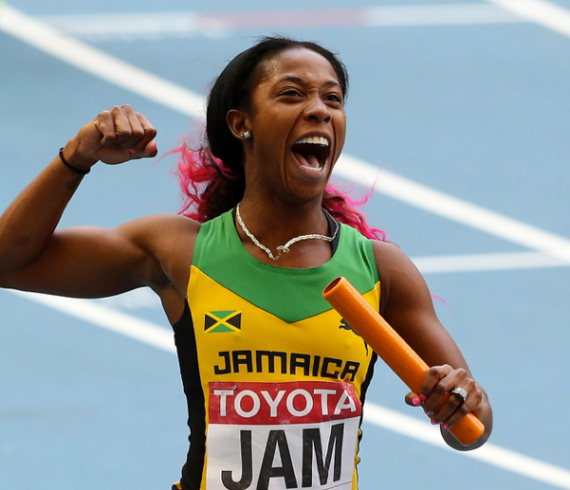 by admin· May 22, 2014· in Jamaica, News, Sourced, Track and Field· 0 comments tags: 4x100M, 4x200M, 4x400M, 4x800M, IAAF World Relays, Watch IAAF World Relays LIVE Stream
Shelly-Ann Fraser-Pryce Shelly-Ann Fraser-Pryce, Jamaica’s much-decorated “Pocket Rocket”, loves relays. After all, in addition to being the world and Olympic champion at 100m, the diminutive sprinter was the anchor of Jamaica’s championship-record-setting 4x100m relay team in Moscow, the second-fastest of all time at 41.29. She also led off Jamaica’s silver medal team in London, bested there only by USA’s 40.82 world record run. Fraser-Pryce will be carrying the baton twice for Jamaica in Nassau, entered in both the 4x100m and 4x200m pools. With 24 countries entering teams – from Jamaica’s Rocket-powered 4x100m to Bahrain’s 4x1500m team featuring Maryam Yusuf Jamal – every women’s race list includes global champions. And for every team with a world or Olympic champion, there is another quartet hoping to gain just enough ground on the other three legs to overcome that advantage. [hr] Watch IAAF World Relays LIVE Stream Women’s 4x100M The USA holds the world record of 40.82 in this event, set in London at the 2012 Olympics, but the clear favourites in Nassau will be world champions Jamaica. While the USA only have one member of their world-record-setting team from London, Jamaica has all four of the world championship-winning team from Moscow […] Read More