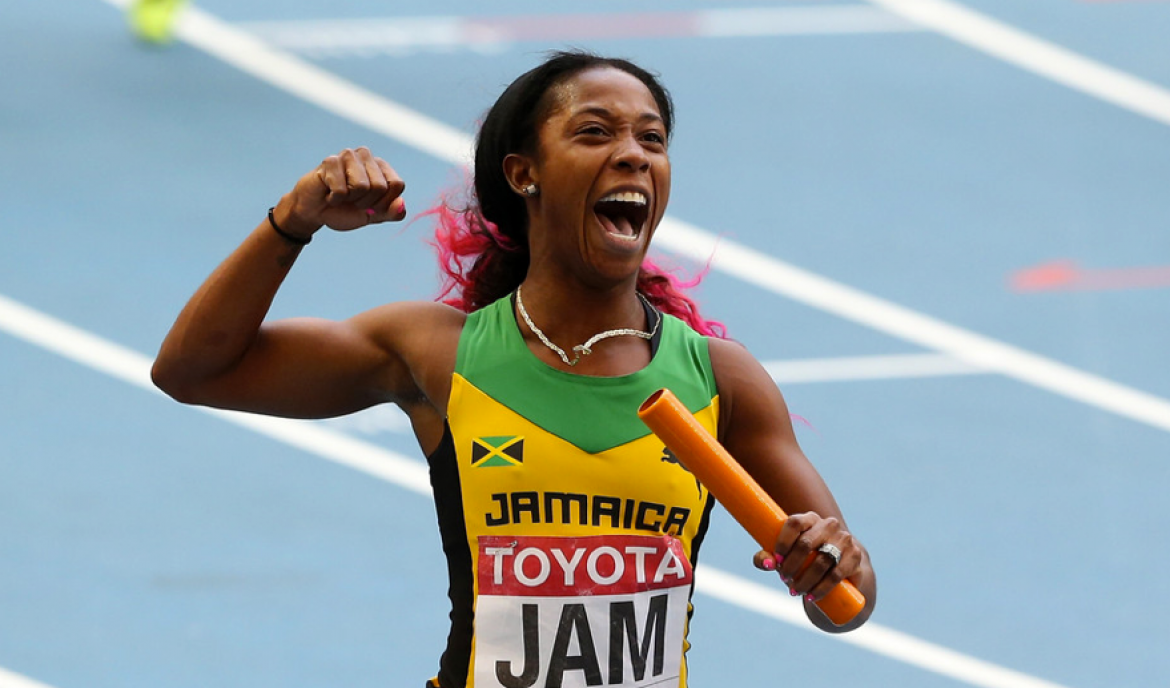 Shelly-Ann Fraser-Pryce, Jamaica’s much-decorated “Pocket Rocket”, loves relays. After all, in addition to being the world and Olympic champion at 100m, the diminutive sprinter was the anchor of Jamaica’s championship-record-setting 4x100m relay team in Moscow, the second-fastest of all time at 41.29. She also led off Jamaica’s silver medal team in London, bested there only by USA’s 40.82 world record run.

Fraser-Pryce will be carrying the baton twice for Jamaica in Nassau, entered in both the 4x100m and 4x200m pools. With 24 countries entering teams – from Jamaica’s Rocket-powered 4x100m to Bahrain’s 4x1500m team featuring Maryam Yusuf Jamal – every women’s race list includes global champions.

And for every team with a world or Olympic champion, there is another quartet hoping to gain just enough ground on the other three legs to overcome that advantage.

The USA holds the world record of 40.82 in this event, set in London at the 2012 Olympics, but the clear favourites in Nassau will be world champions Jamaica.

While the USA only have one member of their world-record-setting team from London, Jamaica has all four of the world championship-winning team from Moscow entered, the second-fastest team of all time: Carrie Russell, Kerron Stewart, Schillonie Calvert and Fraser-Pryce, plus Natasha Morrison and Samantha Henry-Robinson to fill the pool.

France and Ukraine had the next fastest marks in 2013, and Great Britain and Trinidad and Tobago are second and fourth for the best national-team marks in 2014 (Jamaica and the USA are first and third respectively). Ukraine, unfortunately, is not entered, but the other three are and will be looking for an open door.

Nigeria’s quartet, boasting a baton carry from world 2000m bronze medallist Blessing Okagbare, is also not to be discounted.

Sentimental favourites here and a reasonable outside shot for the victory are hosts The Bahamas, whose “Golden Girls” marked up victories at the 1999 IAAF World Championships and 2000 Olympic Games. Bahamas’ relay tradition was part of their motivation for hosting the event and their sprint quartet is likely to be competitive to a degree beyond that suggested by the sum of their PBs.

Most of the Jamaican 4x100m team is also entered in the 4x200m on the following day, and their competition is again most likely to come from the USA.

While Jamaica has more power in their pool – including Fraser-Pryce, and Henry-Robinson from the shorter race, and adding Sheri-Ann Brooks, Anneisha McLaughlin, and Elaine Thompson – the USA has an experienced group comprising Tori Bowie, Paris Daniels, Kimberlyn Duncan, Bianca Knight, Tawanna Meadows and Shalonda Solomon, with several 200m specialists in their pool and nobody doubling back from the 4x100m.

Nigeria, Trinidad and Tobago, and Great Britain have all entered identical 4x100m teams again for the 4x200m, meaning notably that Okagbare will double back to put Nigeria in good position for the longer race.

The world record here is a 1:27.46 run by a US team at the 2000 Penn Relays, and it’s not unreasonable to expect that to be approached if not bested here. Heats and final will both be run on Sunday.

The only teams to run faster than 3:18 in this longer championship relay since 2000 have come from the USA. With past world and Olympic 400m champion Sanya Richards-Ross anchoring the US pool, they are likely to be the favourites here again.

However, Russia are the reigning world champions and posed the strongest challenge to the USA at several recent major championships, pressing that challenge to success in their capital last year. The Russians have not sent the same quartet to Nassau as ran in the final in Moscow, but they are nonetheless likely to be one of the USA’s strongest challengers.

Jamaica again has a stellar line-up in this race, including Novlene Williams-Mills and Kaliese Spencer, and may be hard to beat should they be in contention on the final leg.

Again not to be ignored is the presence of Great Britain and their world champion Christine Ohuruogu, the mistress of the close finish.

Heats of the 4x400m will be run on Saturday with the final scheduled for Sunday.

The real question may be strategy at this rarely-run distance. Will the Kenyans try to break away early and build an insurmountable advantage, or will they be content to stay in a pack and count on superior speed on the last leg to win? Neither strategy is a certainty.

Australia, France, Jamaica, Mexico, Romania, and Trinidad and Tobago are the other six teams entered in this straight-final race, to be held on Sunday.