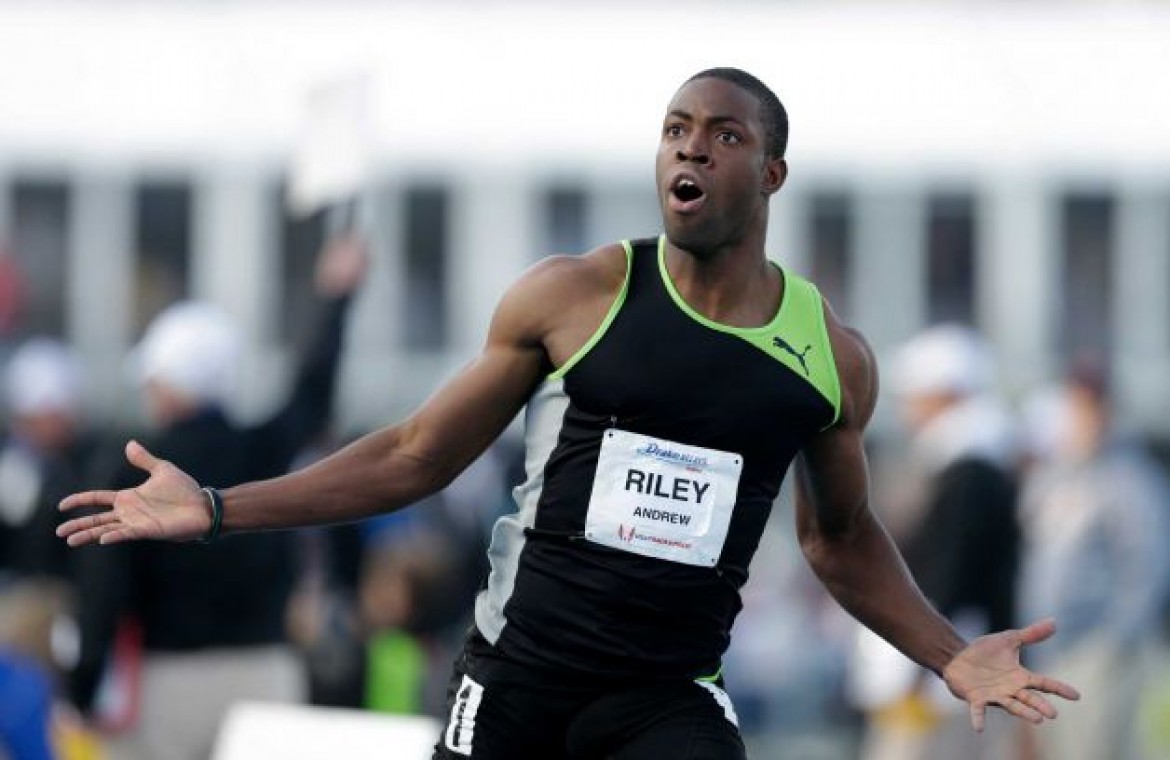 Riley, a 24-year-old who recently completed a US collegiate athletics career, with Merritt settling for second in 13.48 in a race that featured all three medallists from last year’s London Games.

Riley won in 13.43. London silver medalist Jason Richardson was disqualified because of a false start and Jamaican Hansle Parchment, third in the Olympics, ran a disappointing 14.33.

“It means a lot,” Riley said of the triumph in the talent-packed field. “Hurdles is one of those events where we don’t duck and dodge each other like the 100 metres.

“In the hurdles we race each other week-in and week-out so a field like you just saw today you’ll see many, many times again this season, which is a really good thing for the sport and hopefully people can see the hurdles as a marquee event.”

Merritt, who followed up his Olympic gold medal by setting a world record of 12.80 at Brussels in September, pronounced himself satisfied with the race, especially since his training has been hindered by an injury picked up in the indoor season.

“I haven’t raced a field of this calibre since Brussels,” Merritt said. “It was a pretty good run even though it’s relatively early in my training since I came off of injury indoors.”

Merritt said the unfavourable wind of 3.2m/sec made for a messy race. Olympic silver medallist Jason Richardson was disqualified for a false start and Olympic bronze medallist Hansle Parchment was seventh.

“Had the wind not been so strong the outcome probably could have been different for everyone,” Merritt said. “Everyone was smashing hurdles because you can never get on top of your run and it’s really difficult to navigate barriers with that amount of wind.

“Andrew Riley did a really good job navigating the barriers. Big props to him,” Merritt added.

Americans Michael Tinsley in the 400m hurdles and Jenny Simpson in the 1500m and Cuba’s Yarisley Silva in the pole vault posted world-leading performances for the season.

Tinsley won in 48.55, 22-hundredths of a second faster than the prior world-leading time of 2013 he had established at the Kansas Relays.

In the women’s pole vault, Olympic silver medallist Silva turned the tables on Olympic champion Jennifer Suhr with a vault of 4.85m to the American’s 4.63.

In other events, Dominican Luguelin Santos, 19 years old and already the Olympic 400m silver medallist, won the 400m in 44.72, with US veteran Jeremy Wariner, the 2004 Olympic gold medallist and two-time world champion, a distant second in 45.35.

In the women’s long jump, American Brittney Reese, Olympic champion and two-time reigning world champ, won with a leap of 6.94m on her final attempt.

“It was a magnificent week. I came in with certain goals and met them,” Silva said through an interpreter. “(Silva) really liked the environment here because it made her feel welcome and she enjoyed the competition.”

The Drake Relays has typically been a three-day event, starting with a smattering of prep and college events on Thursday and Friday leading up to a harried crescendo of elite invitationals on Saturday afternoon.

This year, organizers spread out the elite races and field events over the final two days — and offered purses of $50,000 and $25,000 respectively to lure stars to Des Moines in April.

It made for the most talented Friday night field in meet history.

Merritt and Suhr were part of seven events billed as London Games rematches, pitting athletes competing at the recent Olympics against each other.

Luguelin Santos of the Dominican Republic, the silver medalist in London, easily won the men’s 400 over the likes of American Jeremy Wariner. Dusty Jonas won the men’s high jump at 7-7.

Simpson, who finished out of medal contention at the 2012 Olympics, won the 1,500 by over 4 seconds. But the breakout star of the race just might have been 16-year-old sensation Mary Cain, who broke the national high school record by finishing sixth in 4:10.77.

“I’m still young and I still just have to take races like this one step at a time,” Cain said. “Before the race I kept telling myself, ‘You learn from mistakes, so if this isn’t the best race of your life, you can still learn.'”