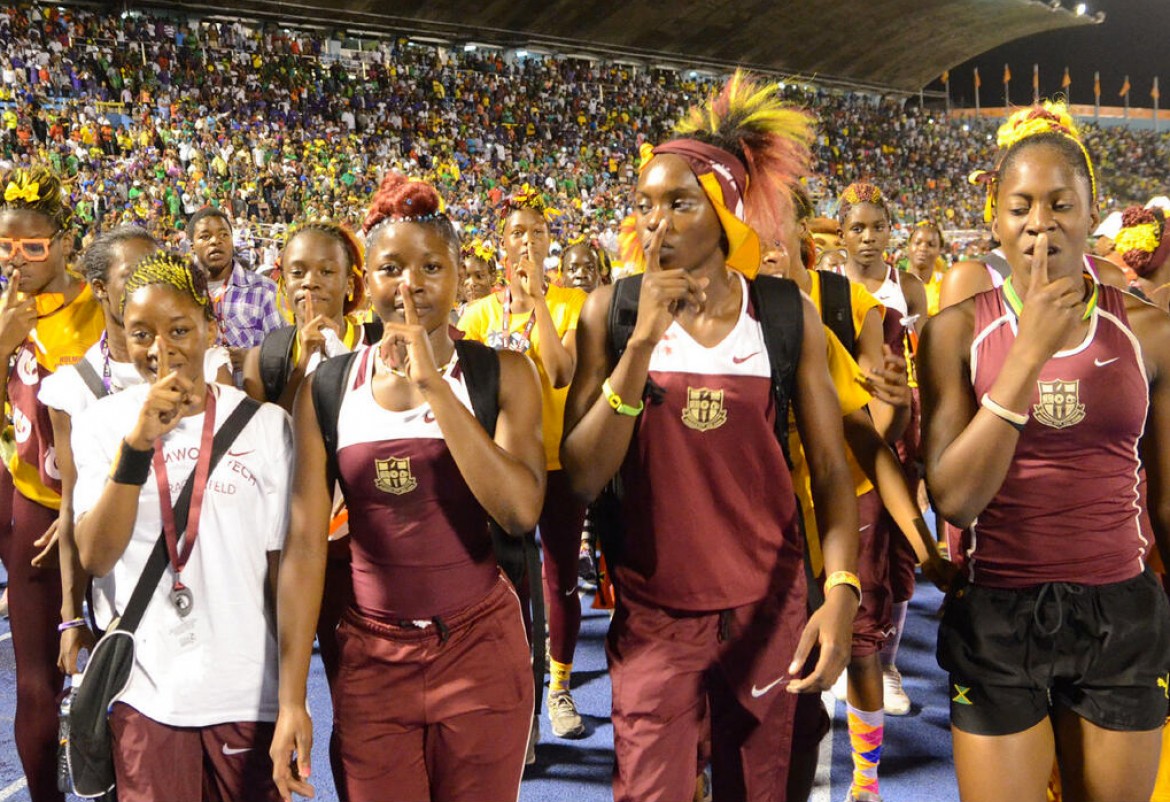 In a sensational final day of the 2013 Inter-Secondary Sports Association (ISSA)/Grace-Kennedy Boys and Girls’ Cham-pionships, Holmwood Technical High came from well behind at the National Stadium yesterday to clip defending champions Edwin Allen High for the girls’ title, while Calabar High easily retained the boys’ crown.

In a meet which saw 18 records falling on the final day and 30 overall, Holmwood wore down long-time leaders Edwin Allen, took the lead in mid-afternoon and came away with a narrow victory.

The green and black army, coached by Michael Clarke, showed admirable grit to muscle their way past pacesetters Jamaica College and Kingston College.

Calabar’s assistant coach Omar Hawes was elated with the victory.

“It’s a big win for Calabar, we expected a close Champs; it turned out well for us because we got a little more points that we expected but we managed well and this was just our year,” Hawes said.

KC’s Zaavan Richards set the stage in the boys’ open javelin with precious points on the line, making the most of his first throw with a record 59.66m, bettering the old mark of 58.75m set in 2011 by James McDonald. Silver medal winner Orlando Thomas (Bridgeport) actually was the first to break the record, with his 59.59 best. JC’s Linkoy Tucker, 57.80, was third.

Discus champion Fedrick Dacres (Calabar), the World Youth and World Junior champion wasn’t pleased with his 62.80m discus win earlier in the meet, but he had to be satisfied with his massive 19.29m Class One shot put fling, erasing his one time teammate Ashinia Miller’s old mark of 18.98m

Another record went tumbling in the Class Three boys’ 100m hurdles event with St Jago’s Kamali Simpson erasing Mathew Palmer’s 2001 time of 13.11 with a determined 13.10 to get the better of St Elizabeth’s Renaldo Banton, who along with long jump champion Calabar’s Alex Robinson, posted 13.35.

On the girls’ side, Edwin Allen entered the championships as the overwhelming favourites to claim only their second lien on the title and looked well on course after assuming the lead from day two.

Holmwood held a three-point lead going in tot final event, the 4x400m and a second place finish in that event was enough to hand them the title.

Earlier, Edwin Allen suffered a blow to their championships hopes when favourite Marleena Eubanks failed to face the starter for the Class Two 800m final. Eubanks, who won the Class One 1500m on Friday, however, ran on the 4x400m relay team.

Meanwhile, Vere’s Shericka Jackson, competing at her final Champs went out in style after capturing the Class One 200m and 400m titles.

The 18-year-old also defended her Class One 400m title winning in 51.60 seconds improving on her previous personal best (PB) of 52.94 seconds.