USA vs. The World USATF relay pool for 2013 Penn Relays 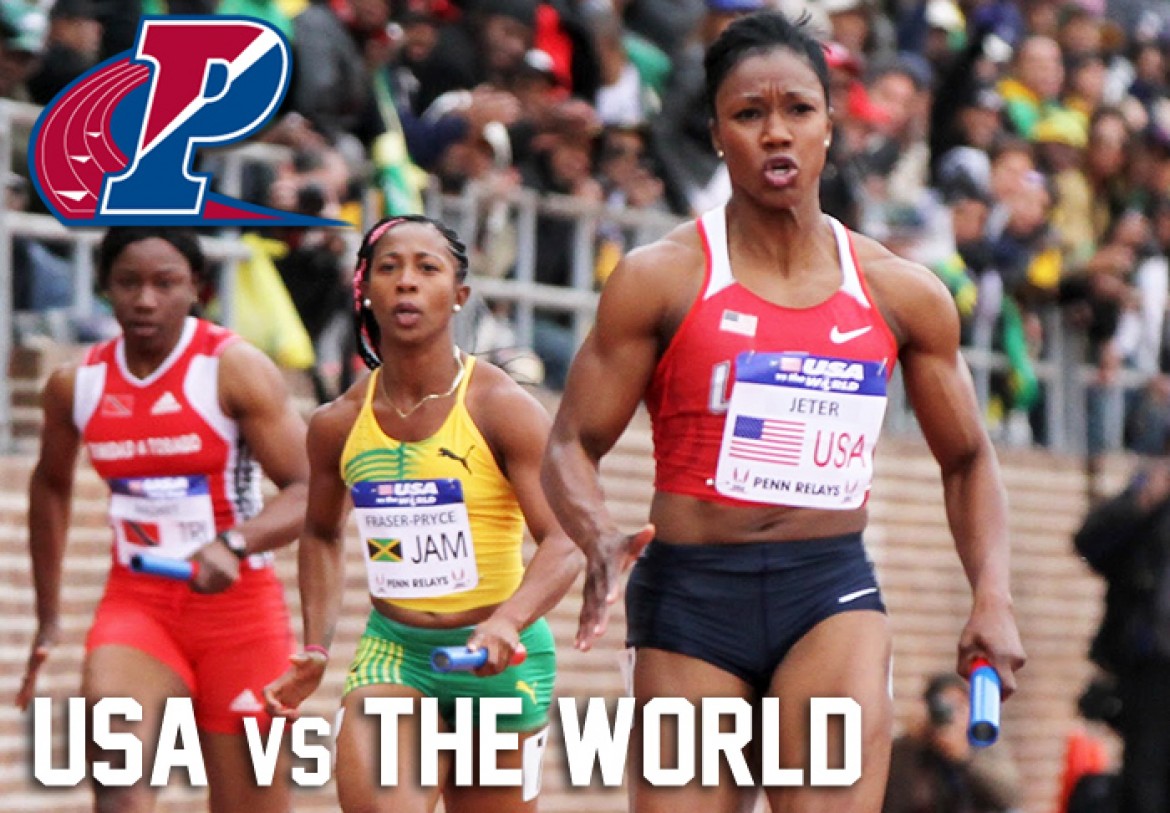 It will be a USA vs. Jamaica showdown in the men’s 4x100m. Team USA will feature Olympic silver relay medalists Justin Gatlin, Trell Kimmons, Ryan Bailey, Doc Patton and Jeff Demps. Other U.S. men in the relay pool include: current world leader Mike Rodgers and Wallace Spearmon. The Jamaican team will include Nesta Carter of the 2012 Olympic gold medal relay, along with Jason Young, Kimari Roach, Dexter Lee and Rasheed Dwyer. Other international challengers include: the Bahamas, Canada, France, Germany, Nigeria and the United Kingdom.

With a world record to their name, the Team USA women will be hard to beat. The record setting relay lineup of Allyson Felix, Tianna (nee’ Madison) Bartoletta, Bianca Knight and Carmelita Jeter will be down one woman after Jeter pulled up with an apparent cramp at Mt. SAC last weekend. The U.S. has plenty of depth to fill her spot with the likes of Chelsea Hayes, Jeneba Tarmoh and Alexandria Anderson also in the pool. The U.S. and Jamaican rivalry will be strong in this event as Jamaica brings three members of their silver medal Olympic team with two-time Olympic champion Shelly-Ann Fraser-Pryce, Sherone Simpson and Kerron Stewart. The international field will also include: the Bahamas, Canada, Germany, Nigeria and Trinidad and Tobago.

It will be a gold medal reunion with 2012 Olympic gold medalists Sanya Richards-Ross, Allyson Felix, DeeDee Trotter and Francena McCorory in the relay pool for Team USA. Olympians Keshia Baker, Natasha Hastings and Mary Wineburg will also strengthen the U.S. lineup. Internationally, Team USA will face the United Kingdom, Russia, Nigeria, Jamaica, Canada and the Bahamas. While Russia took silver in London, none of the medalists will be competing this weekend; however, Jamaica will send three members of its bronze medal team with Christine Day, Shericka Williams and Novlene Mills.

Team USA will face a tough challenge in the men’s 4x400m with the gold medal quartet of Chris Brown, Demetrius Pinder, Michael Mathieu and Ramon Miller from the Bahamas traveling to Franklin Field. Also challenging for the win will be the Caribbean All-Stars team led by Olympic champions Kirani James and Felix Sanchez. Team USA will feature Olympic silver medalists Tony McQuay and Manteo Mitchell. While LaShawn Merritt was injured and unable to run in the 4x400m in London, he will run his first relay since last year’s USA vs. The World. Other members of the Team USA relay pool include: Bershawn Jackson, Jeshua Anderson and Jamaal Torrance.

Team USA’s 2012 Olympic 800m trio of Alysia Montano, Geena Gall and Alice Schmidt will all be on hand for this event new to the USA vs. The World lineup. With the U.S. boasting great middle distance depth, the relay pool will also include Anna Willard, Phoebe Wright, Brenda Martinez and Ajee Wilson. Wright will be looking to better her own American record of 8:17.91 in the 4x800m that she set while running for the University of Tennessee in 2009. Team USA will face strong squads from Canada, Ethiopia, Kenya, Russia and the United Kingdom.

The U.S. men look strong with 2012 Olympians Bernard Lagat, Nick Symmonds, Duane Solomon and Andrew Wheating in the relay pool. Erik Sowinski also looks to make a name for himself outdoors after a stellar indoor season that included the 600m American record and the USA Indoor 800m title. Team USA will go up against deep fields from the United Kingdom, Morocco, Kenya, Ireland, Ethiopia, Canada and Australia.

Relay lineups will be available after the technical meeting on Friday, April 26.

For more information on USA vs. The World at the Penn Relays and the 2013 USATF Outdoor Championship Series, visit www.usatf.org